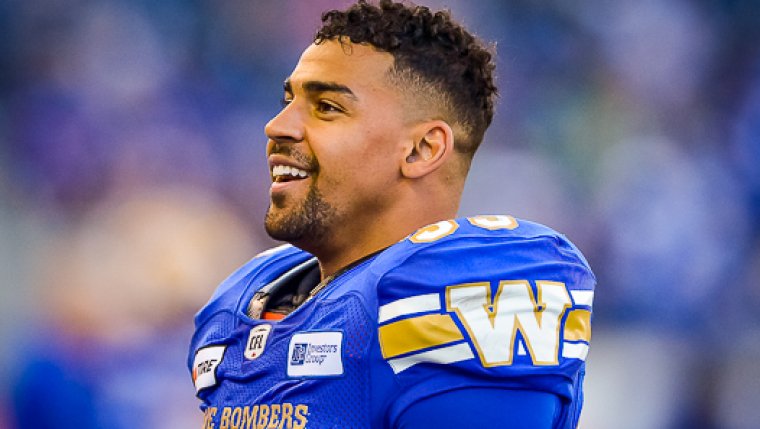 WINNIPEG - If Friday night was any indication of what the future holds for the Winnipeg Blue Bombers, it’s going to be an exciting time for Bomber fans.

Rookies Chris Streveler, Drew Wolitarsky and Rashaun Simonise all made their presence felt as the Bombers ripped apart the Montreal Alouettes from start to finish with an impressive 56-10 win at Percival Molson Stadium.

In one of their most dominant offensive performances in recent memory, the Bombers put up 56 points – the most since 2005 – picking apart the Alouette defence to the tune of 588 yards of total offence on the night.

After an impressive opening drive that ended in a Justin Medlock field goal, the Bombers went deep in their play book, pulling out some trickery. Streveler found receiver Darvin Adams behind the line of scrimmage, and Adams showed off his arm strength, firing a 26-yard strike to Andrew Harris in the end zone to put the Bombers up 10-0.

Montreal, led by former Bomber quarterback Drew Willy, would cut the lead to 10-7 in the second quarter, but that’s as close as the Alouettes would come Friday evening. Willy finished the night completing 16-of-25 passes for 111 yards and a touchdown in his first start against the Bombers since being traded away two years ago.

On Winnipeg’s next possession, Streveler answered the Montreal touchdown with a 95-yard drive, capped by a 10-yard toss to Nic Demski who made a great play coming back to the ball in the end zone, to make it 17-7.

Streveler found his old college roommate Wolitarsky with his first of two touchdown catches with a 16-yard strike just moments later to put the Blue and Gold up 24-7.

The rout was on and it got even worse for Montreal. After Anthony Gaitor sacked Willy on second down, Simonise found a seam and blocked Boris Bede’s punt attempt. Winnipeg recovered inside the five-yard line and Streveler would run it in himself to make it 31-7 after the converted convert. A late field goal from Medlock sent the Bombers to the dressing room with a 34-7 lead at the half.

Streveler was dynamic from the beginning, mixing things up between his arm and his legs. By the time head coach Mike O’Shea decided to give him the rest of the night off early in the fourth quarter, Streveler had gone 22-for-28 for 246 yards and three touchdowns and no interceptions, while adding another 98 yards on the ground, which was a team-high.

Winnipeg did get a scare in the third quarter when running back Andrew Harris was hit low and left the game with an apparent knee injury but was seen riding a stationary bike on the sideline and never went to the dressing room for attention. Harris finished with 58 yards rushing and 68 yards through the air.

Streveler would be replaced by Bryan Bennett after connecting with Wolitarsky on a 10-yard touchdown pass early in the fourth. Bennett looked strong against a depleted Alouette defence who looked like they had nothing left in the tank in the fourth quarter. Bennett threw for 71 yards and also showed versatility and speed with an impressive 31-yard run before Kienan LaFrance, who took over for Harris, picked up his first rushing touchdown in a Bomber jersey to round out the scoring.

The Bombers improve to 1-1 after their first two games of the season, while the Alouettes fall to 0-2.

Winnipeg heads to Hamilton next week to take on the Tiger Cats before returning home July 7th to face the B.C Lions at Investors Group Field.