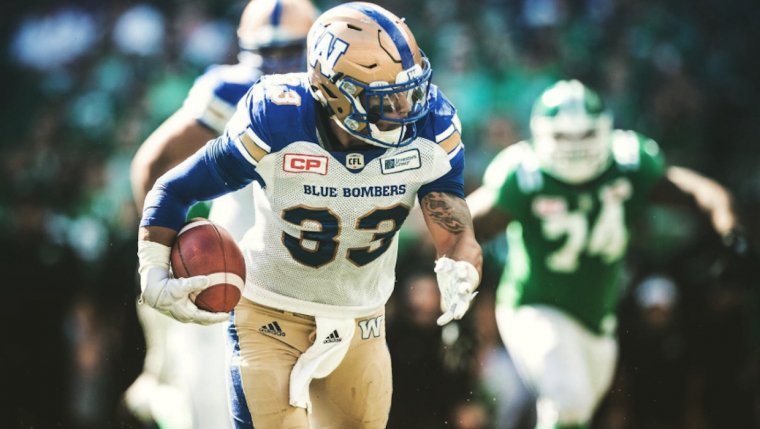 WINNIPEG - After spending nearly two weeks competing against their own team in training camp, the Winnipeg Blue Bombers will get to see a different set of jerseys on Friday night when they welcome the Edmonton Eskimos to Investors Group Field for their first pre-season game of 2018.

The Bombers finished the 2017 season with a strong 12-6 record and a home playoff spot — the first they've clinched since 2011, but were taken down by the Eskimos 39-32 in the Western Division semi-final.

It may be only a pre-season game, but the bad taste from the Western Division semi-final still lingers. As we saw this past weekend in the pre-season game between the Edmonton Eskimos and Saskatchewan Roughriders, the teams are not shying away from putting out their first team unit for the games. Will the Bombers dress many of their starters Friday night in front of their home crowd? That remains to be seen.

Today we take a look at the Bombers offence heading into Friday night’s action.

Matt Nichols is the undisputed number one pivot on the club, and may even see some reps on Friday night, but something Mike O’Shea and the Bombers are going to want to see is what they have behind the clubs number one quarterback. The number two spot became wide open coming into training camp after the unexpected retirement announcement from expected backup quarterback Darian Durant just a week before camp. That opened the door for others and sophomore Alex Ross has had a great camp for the Bombers, and looks like the backup spot might be his to lose going into Friday night and I expect to see Ross getting a good portion of the reps against the Eskimos. Ross spent last season with the B.C Lions as their number three. Winnipeg will also want to see what 23-year-old Chris Streveler, who is coming off a record-breaking season with the University of South Dakota Coyotes can do in game action.

The receiving core for Winnipeg has the potential to be one of the most potent in the CFL. Last season Winnipeg finished eighth in average passing yardage, averaging just 271.9 yards per game. Looking to improve those numbers, the Bombers added a pair of free-agent signings in the off-season with Adarius Bowman and Nic Demski joining the club. They join returning veterans Weston Dressler, Darvin Adams and Ryan Lankford. With that being said, there is an opportunity for some of the newcomers to come in and challenge for a spot, and maybe none more intriguing than the competition for the second Canadian receiver spot. Rashaun Simonise, the Bombers 12th overall pick in this year’s draft, has taken a lot of first-team reps during camp, and should see a few balls tossed his way Friday night. Drew Wolitarsky, who spent most of last season on the Bomber practice squad, has had a great camp and could take a run at the open spot and Daniel Petermann, drafted 26th overall by the Bombers in the 2018 draft, is right there in the running as well after an impressive camp.

In the backfield, the Bombers have one of the best in running back Andrew Harris, who is coming off arguably his best season in his eight year CFL career. The 31-year-old won the CFL rushing title, set a record for receptions by a running back with 105, earned a spot on the CFL All-Star Team and was named the league’s Most Outstanding Canadian. Behind Harris is Timothy Flanders, who showed signs of brilliance last season in spot duty for the Bombers. In two years with the club, Flanders has averaged 5.7 yards per carry, and has also shown he’s able to line up as a receiver if needed. Winnipegger Kienan LaFrance is another option in the Bomber backfield after signing with the club in February. The former University of Manitoba Bison played in 13 games for Saskatchewan last season, carrying the ball 68 times for 273 yards and two touchdowns adding 14 catches for 123 yards and one major.

Get ready to knock on wood Bomber fans, but the offensive line has been one of the most consistent in recent memory when it comes to starting positions. Over the past two seasons, Stanley Bryant, Matthias Goosen, Sukh Chung, and Jemarcus Hardrick have started a combined 140 games. They played a huge part in the success Andrew Harris had running the ball last season (led the CFL in rushing with 1,035 yards), and Matt Nichols passing (8,138 yards and 46 touchdowns). They did lose Travis Bond, who signed with the Saskatchewan Roughriders in the off-season, but Patrick Neufeld, who replaced an injured Bond late in the season, will join Goosen and Chung as three Canadians on the offensive line.

Tomorrow we take a look at the defensive side of the ball, and look at the improvements made by the Bombers in the off-season and what fans can expect to see as the Bombers get set for their first game action Friday night against Edmonton.