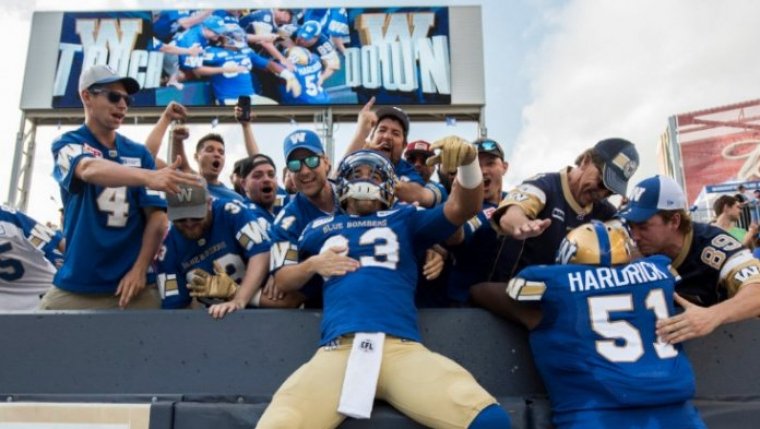 WINNIPEG - It’ll be 620 days between games for the Winnipeg Blue Bombers when they return to IG Field this Thursday to play Hamilton and raise their 2019 Grey Cup banner won in convincing fashion 33-12 over the Tiger-Cats. That was the last CFL game as the league board of governors cancelled the 2020 season because of Covid-19.

Since it is also the home opener I thought I'd check the history books to see how other Bomber teams fared in their first game in front of their home fans the year following a Grey Cup victory.

After their historic Cup victory of 1935, the first for a team from the west, the Winnipegs opened their 1936 campaign with a pair of games in three days against the Calgary Bronks at Osborne Stadium.

There will be close to 30,000 fans at IG Field this week and back in 1936 there were 25 hundred fans in attendance ready to cheer on the Pegs. They went home very wet and largely disappointed because of a heavy rainstorm and a lacklustre performance from their heroes. They expected more than an 8-0 win that Saturday afternoon in early September.

Now come Monday afternoonit was all sunshine for the fans as the reigning Grey Cup champs served up plenty of excitement. There were touchdowns aplenty as the Pegs pounded the Bronks 26-0. ‘The Minnesota Meteor' Fritz Hanson scored twice including a thrilling 90 yard return to open the second half that brought the crowd of 3,000 to their feet and certainly brought back memories of his 78-yard punt return touchdown against the Hamilton Tigers in the ’35 Grey Cup.

Here is Winnipeg Tribune sports writer Herb Manning’s descriptive account of Hanson’s touchdown. “Hanson took the second half kick-off on his own 10-yard line and the fun started. The little fellow ran leisurely for five or six yards as Bronk tacklers converged on him from all sides. Then, with a sudden spurt, he cut toward the right of the field, leaving the Calgary advance guard in his wake. Another shift and he sprinted straight through the centre of four more tacklers and had only Charlie Harrison to beat. This obstacle he side-stepped and sprinted into the clear, with the Bronks thundering down the field behind and the stands echoing with cheers. The westerners were gaining on him in the last ten yards to the Calgary goal line, but Fritz swerved once more toward the centre of the field and cut again to the right to cross the payoff strip untouched.”

By 1939 the Winnipegs were now the Blue Bombers and following their Grey Cup win over the Ottawa Rough Riders they began play in 1940 with road losses in Calgary and Regina.

A different outcome back home under the Friday nightlights of Osborne Stadium. They shutout the Roughriders 12-0 as Jeff Nicklin, playing in his final season, scored one of his last touchdowns for the Bombers.

WWII was underway and Nicklin had enlisted and was a Second Lieut. with the Royals Winnipeg Rifles. During that 1940 season Nicklin would be given leave to play games. By the time he was sent overseas Nicklin had been promoted to Lieut. Colonel and parachuted into France on D-Day in 1944. Sadly Nicklin was killed in March of 1945 during ‘Operation Varsity.’

The CFL honours his memory with the Jeff Nicklin Memorial award presented to the Most Outstanding Player in the Western Division.

In 1941 the Bombers won their 3rd Grey Cup in seven years but because of the war the WIFU (Western Interprovincial Football Union) suspended operations from 1942 to 1945.

It would take another 17 years before the Bombers were Dominion Champions again as they outscored the Tiger-Cats 35-28 in 1958. It was the first of four Grey Cups under head coach Bud Grant.

Winnipeg was full of confidence heading into the ’59 season and started with road wins over Edmonton and Calgary. But their home opener was a different story as two first quarter turnovers led to 14 early points for the Stampeders and the deficit proved too big a mountain to climb as Calgary held on for a 23-21 victory.

That year did conclude with a second consecutive Grey Cup and a third was not out of the question as the Bombers began the 1960 season with 10 wins.

That year In their home opener the Bombers dismantled the visiting Stamps by 43 points and it would have been more but Grant played his reserves for most of the second half. Highlight of this night was running back Carver Shannon who led the Bomber scoring frenzy with three touchdowns in the 50 to 7 rout. Leo Lewis also had a memorable game tossing two TD passes. The Bombers appeared to be unstoppable winning 14 of their 16 games in the regular season. Unfortunately they also lost twice in the playoffs. Losing the best of three Western Final to Edmonton. Most players from that 1960 team say they had a better team than any of the four that won the Grey Cup.

The Bombers were back on top of the CFL in 1961 winning the Grey Cup in a dramatic overtime over the Ti-Cats. The 1962 began with the team winning seven of their first eight games. The one game they lost was their home opener against Edmonton. According to legendary sports writer Jack Matheson the Bombers committed “six errors of execution and judgement” in their 16-20 loss to the Eskimos. However the Bombers did finish the ‘62 season as Grey Cup champs for the fourth time in five years.

Under Grant the Bombers had just two losing years in which they failed to make the playoffs and in 1963 they won only seven and lost nine including a Monday nighthome opener to the Stampeders by a score of 24-8.

It would take the Bombers another 22 years to celebrate their next Grey Cup triumph and that was in 1984 when they tamed the Tiger-Cats and Dieter Brock 47-17.

The 1985 season began with a road loss to the Montreal Alouettes but they would rebound in their home opener. A Grey Cup rematch with the Tiger-Cats, minus Brock. It wasn’t a classic or memorable victory as Tom Clements was intercepted three times and they committed three other turnovers on fumbles. Somehow the Bombers still managed a 16-11 win.

If there was a highlight of this game it was former Bomber, now Ti-Cat, Bernie Ruoff becoming the new CFL all-time leader for punting yards and most punts surpassing the numbers set by Zenon Andrusyshyn.

Of the 11 Grey Cup victories in the 91 year history of the Winnipeg Football Club their most unlikely occurred in 1988. Bombers stumbled through a 9 and 9 regular season that left their fans apathetic. Only 12,210 showed for the Semi-Final against Hamilton. They won that game and then stunned the Argonauts in the Eastern Final and they topped it off with a Grey Cup upset over the BC Lions 22-21.

The home opener in 1989 was a thrill a minute joyride for the fans. A back and forth contest with the Ottawa Rough Riders now led by Damon Allen. There were six lead changes and it was Sean Salisbury who engineered a five play 76 yard scoring drive in the final minutes for the win. Salisbury capped off the comeback with a 16-yard TD pass to Buster Rhymes that put the Bombers ahead for good in the 29-24 win.

In 1990 following their 55-11 Grey Cup win over the Eskimos in the Grey Cup game head coach Mike Riley decided to move on to different challenges. General Manager Cal Murphy wanted the job but the club board of directors said no. So Murphy hired Darryl Rogers to take over from Riley and the former head coach of the NFL’s Detroit Lions struggled with the Canadian game.

His lack of familiarity with the CFL may have cost the Bombers a home opener victory against the BC Lions and Doug Flutie in 1991.

In that game Trevor Kennerd had kicked three field goals but two others had been blocked. In the final seconds of a tied game a victory was within reach if Kennerd could split the uprights from 27 yards out. He didn’t and the Lions' Lui Passaglia fielded the ball and booted it out of the end zone and out of play sending the game to overtime.

Adding to Rogers frustration was that Passaglia won the game for the Lions in overtime 26-23 on a last play 34-yard field goal.

Since the line of scrimmage was at the 20 for Kennerd’s last attempt a reporter smartly asked Rogers if he had considered the option of having Bob Cameron punt for the single point and the victory? In an angry tone Rogers snapped back to the reporter that “that’s a good second guess question.” Rogers wasn't being second guessed but considering his concerns about Kennerd it was obvious he had not thought about it or didn't know you could do that under CFL rules.