Harris Has Big Night in Win Over Toronto 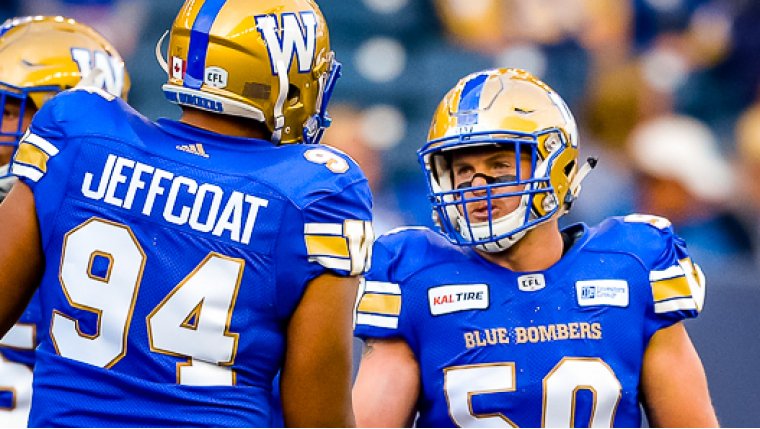 WINNIPEG - Andrew Harris ran for a career-high 161 yards and two touchdowns, and Matt Nichols threw for a pair of touchdowns as the Winnipeg Blue Bombers beat the Toronto Argonauts 38-20 in the first game of a home-and-home series between the two clubs.

But they sure didn’t make it easy on themselves.

The Bombers were coming off a loss a week earlier which saw them take a 17-point lead into the half and then lose 20-17 to the B.C Lions, and this game was looking as though it might happen again.

Winnipeg’s offence once again looked great for the majority of the first half. Nichols threw touchdown passes to Darvin Adams and Andrew Harris in the first half, and Harris also ran one in, putting the Bombers up 22-1 just a couple minutes into the second quarter. But as they did a week ago, the Bombers allowed their opponent a chance to get back into the game by being their own worst enemy.

In the final minute of the first half, Kevin Fogg bobbled a punt return which was picked up by Llevi Noel who ran 49 yards to the end zone to give the Argonauts life.

With 12 seconds left the usually sure-handed Harris fumbled the ball which was recovered by Toronto and Ronnie Pfeffer kicked a 31-yard field goal as the half ran out and suddenly instead of a comfortable lead and all the momentum, it was 22-12 and Toronto was knocking on the door.

Bomber fans were waiting to see which team would come out for the second half, and they were relieved to see that unlike last game, Winnipeg was able to regain the momentum and score points in the second half. Nichols scored on a one-yard run and Justin Medlock kicked a pair of field goals to go up 35-12.

But again, yet another turnover threatened to give Toronto some life when Jermaine Gabriel returned a Nic Demski fumble 87 yards late in the quarter to make it 35-20.

That’s as close as it would get and Medlock would kick his third field goal of the game in the fourth quarter to round out the scoring and give the Bombers a 38-20 win.

It was far from a perfect performance, but there were many things to build on for Winnipeg who now sits at 3-3 on the season.

Andrew Harris rushed for a career-best 161 yards. The 31-year-old was dominant from start to finish.

Matt Nichols responded after throwing three interceptions in his last start, Nichols went 19/27 for 245 yards, two touchdowns and no interceptions.

The defence allowed just 22 yards on the ground, 151 yards through the air, and didn’t allow a major against all game.

Turnovers: Winnipeg had four fumbles on the night and have now registered 9 turnovers in their past two games. In both games they had the chance to put their foot down on the throats of their opponents, and failed to do so allowing both the Lions and Argonauts a chance to get back in the game.

Just 10,488 fans attended the game at BMO Field in Toronto on Saturday night.

The Bombers and Argo’s will meet next Friday night at Investor’s Group Field in Winnipeg in the second game of their home-and-home series.