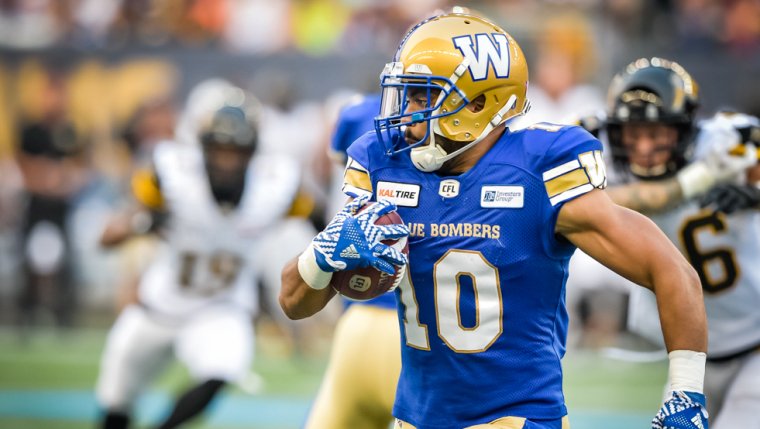 WINNIPEG - Another great night from Andrew Harris, and contributions from all facets of the team were enough for the Winnipeg Blue Bombers to hang on for a 29-23 win over the Hamilton Tiger Cats on a sweltering evening at Investors Group Field.

Harris finished the night with 82 yards on the ground on 16 carries, and led all Bomber receivers with another 46 yards through the air as the Bombers improved to 5-3 on the season and moved into a second-place tie with the Edmonton Eskimos in the CFL Western Division.

After giving up a touchdown on Hamilton’s first drive, the Winnipeg defence wouldn’t allow a point the rest of the half as the Bombers took a 19-7 lead to the dressing room at the midway point of the game.

Winnipeg got on the board when Matt Nichols found Weston Dressler with a 10-yard touchdown pass to the veteran receiver. The catch extended Dressler’s consecutive game with a reception streak to 120.

Harris would add a three-yard touchdown run before the first quarter ran out. A Justin Medlock field goal and a Hamilton safety made it 19-7.

The teams exchanged field goals and touchdown passes in the third quarter with Nichols connecting on a 34-yard toss to Nic Demski, while Jeremiah Massoli answered with his favourite receiver on the night Brandon Banks on a 15-yard completion. Banks finished the game with six receptions for 106 yards and a touchdown.

Hamilton struck early in the fourth quarter on a two-yard run from Alex Green with his second touchdown of the night, cutting the Bomber lead to 26-23. That’s as close as the Tiger Cats would come and Medlock would connect on a 33-yard field goal to put the Bombers up 29-23.

The defence would come up big for Winnipeg, stopping a late drive from Hamilton to seal the third consecutive win for the Bombers.

Nic Demski had two receptions for 45 yards, but was sensational returning kicks all night long and setting the Bomber offence up with great field position. Demski had four kick returns for 134 yards, including a 55-yard return that led to a touchdown.

Adam Bighill registered his first sack of the season, added seven more defensive tackles, and had a forced fumble. Winnipeg had four sacks on the night.

Winnipeg will now get set to welcome to top team in the CFL Eastern Division Ottawa Redblacks to Investors Group Field next Friday night.