Bombers Have no Answer for Masoli in Loss to Tiger Cats 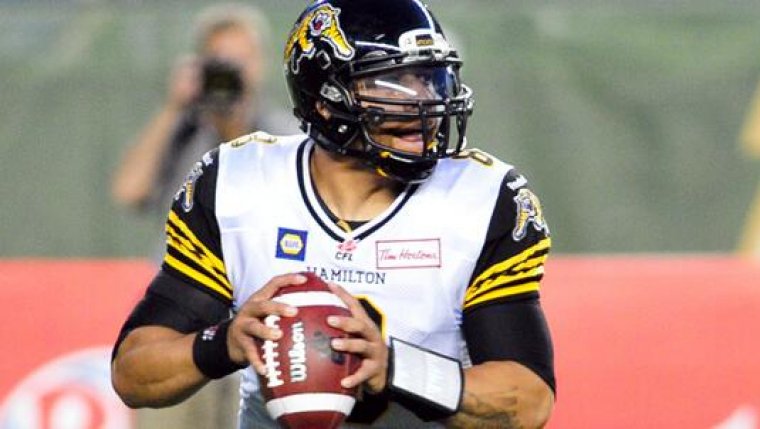 WINNIPEG - Just like many other teams in the CFL, the Winnipeg Blue Bombers couldn’t find an answer for the red-hot Jeremiah Masoli and fell to the Hamilton Tiger Cats 31-17 at Tim Hortons Field Friday night.

The Ti-Cats quarterback threw for 369 yards on the night, surpassing the 300-yard passing mark for the eighth straight game, - one off the CFL record – and Hamilton’s defence kept Winnipeg’s offence from ever gaining any real momentum during the contest.

After putting up 56 points on Montreal last week, the Bomber offence looked like they were going to carry that momentum into Hamilton after getting on the board first. After a Marcus Sayles interception, it took Winnipeg all of four plays to find the end zone, with running back Andrew Harris completing a 30-yard drive with a one-yard plunge to put the Bombers up 7-0.

Masoli answered with an 88-yard drive of his own. Masoli found his favorite receiver on the night Brandon Banks with a 37-yard strike during their march down the field, leading to an eventual 1-yard touchdown run from Mercer Timmins to tie the game.

Winnipeg would regain some life early in the second quarter when Mike O’Shea called for a fake punt as the Bombers were just out of Justin Medlock field goal range, and a direct snap to Jesse Briggs led to the Bombers extending their drive. That led to Medlock connecting on a 38-yard field goal to regain the Bomber lead.

That would be the last time Winnipeg would see the lead, as Lirim Hajrullahu connected on three field goals in the quarter, giving Hamilton a 16-10 lead at the half.

The third quarter was all Hamilton, outscoring the Bombers 15-0 and keeping Winnipeg’s offence off the field for the majority of the quarter.

Winnipeg’s offence was unable to find a way to stay on the field for any length of time, with Hamiton’s defence at one point holding the Bombers to six consecutive two-and-outs. Chris Streveler, coming off a week which saw the 23-year-old rookie quarterback receive CFL Top performer of the Week honors, once again showed off his ability to run the ball, taking off for a 15-yard touchdown run with just over 10 minutes to play in the fourth, getting Winnipeg within two converted touchdowns.

Steveler put together a late drive in the fourth quarter using the hurry-up offence but was unable to find the end zone and finished the night with just 176 yards passing on 17 completions and no touchdowns.

Once again Winnipeg’s defence gave up far too many big plays, while the offence was unable to stay on the field long enough to give them a rest. Winnipeg gave up 369 yards through the air, and another 111 on the ground in the loss. One of the bright spots on defence for Winnipeg was Adam Bighill, finishing the night with a game-high 10 tackles.

Weston Dressler was the top receiver for the Bombers with six receptions for 55 yards, while Harris finished with 14 carries for 66 yards on the ground.

The Tiger Cats improve to 2-1 on the season, while Winnipeg falls to 1-2 and return home next Saturday when they host the B.C Lions at Investor’s Group Field.