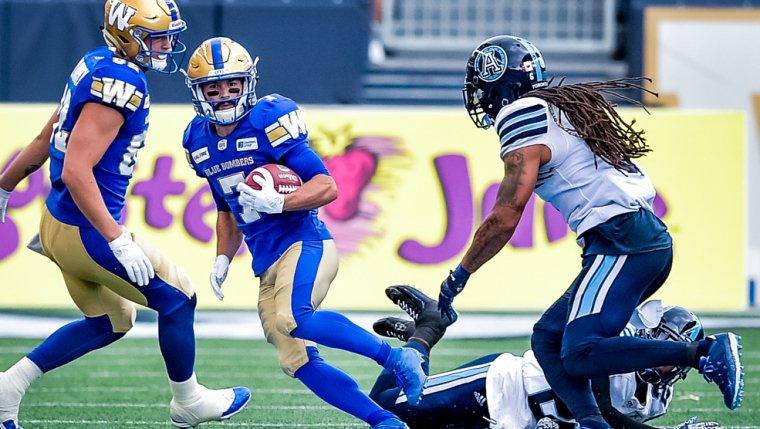 WINNIPEG - The Winnipeg Blue Bombers completed the home-and-home sweep over the Toronto Argonauts with an impressive 40-14 win on Friday night at Investors Group Field.

Nic Demski had a pair of touchdowns, Jovan Santos-Knox had three sacks, and the Bombers improved to 4-3 on the season, getting contributions on offence, defence, and special teams in the win.

Demski, had his best night as a Bomber since signing with his hometown team as a free agent this past offseason after three seasons with Saskatchewan, finishing with three carries for 34 yards, including his 28-yard TD run while adding five catches for 82 yards with a 42-yard TD reception.

Justin Medlock got the ball rolling for Winnipeg, connecting on his first of four field goals in the game with a 47-yarder on the Bombers first possession.

Winnipeg’s defence continued where they left off from last week, with Santos-Knox picking. Up his first of three sacks on Argo quarterback James Franklin on their first drive, forcing them to punt.

On Winnipeg’s next possession, the offence went to their bag of tricks yet again, this time receiver Darvin Adams took a direct snap and found quarterback Chris Streveler (Yes, you read that right) to give Winnipeg a first down. After a Toronto penalty, Matt Nichols found Demski with a perfect pass over the shoulder on a 42-yard strike to put Winnipeg up 10-0.

It looked as though the Argonauts were going to answer on their next drive when Franklin found WR Rodney Smith with a deep ball, but Bomber DB Brandon Alexander ripped the ball from his hands as he was going down, causing a fumble that negated what would have been a 46-yard gain, and the Bomber regained possession.

Medlock would add a field goal before the first quarter would run out, putting Winnipeg up 13-0.

The Argonauts would turn things around in the second quarter, thanks in large part to James Wilder Jr, who was the most dangerous player on the field for Toronto on the night. After starting the drive on their own 29-yard-line, Franklin and Wilder drove the team down to the Bombers three-yard-line before Wilder Jr plunged in to get Toronto on the board.

Momentum stayed on the side of Toronto, when former Bomber T.J Heath picked off Nichols midway through the quarter but couldn’t capitalize and had to settle for a punt single.

Winnipeg would regain the momentum on their next possession with a tightrope touchdown from Demski, who strattled the sideline on a 28-yard run into the end zone, and with the convert the Bombers were up 20-8.

A 22-yard field goal was the only scoring in the third quarter before the Bombers would blow things wide open in the fourth. Nichols connected with WR Drew Wolitarski for an eight-yard strike to put Winnipeg up 33-8, and on the Argonauts next possession, Mike Miller blocked a Ronald Pfeffer punt that was gobbled up by Ian Wild and ran in for a touchdown, giving the Bombers a 40-8 lead. Toronto would add a late touchdown on a quarterback sneak from Franklin, but the game result was never in doubt.

Nic Demski finished with 116 all-purpose yards on the night, carrying the ball three times for for 34 yards, while adding five catches for 82 yards.

Jovan Santos-Knox was a beast on Friday night, finishing with three sacks and 10 defensive tackles.

Kenbrell Thompkins, who started his first CFL game in the vacant spot left when Adarius Bowman was traded last week, finished with three receptions for 81 yards, including a 51-yard catch.

Chris Randle, Kevin Fogg, and Brandon Alexander each had an interception on the night.

Justin Medlock went a perfect 4-for-4 in the field goal department.

The not so good

Toronto had seven turnovers on the night. Two fumbles, three interceptions and two on downs.

Winnipeg will now enter their bye week with a 4-3 record and a two-game winning streak before getting back to action August 10 when they welcome the Hamilton Tiger Cats to Investors Group Field.