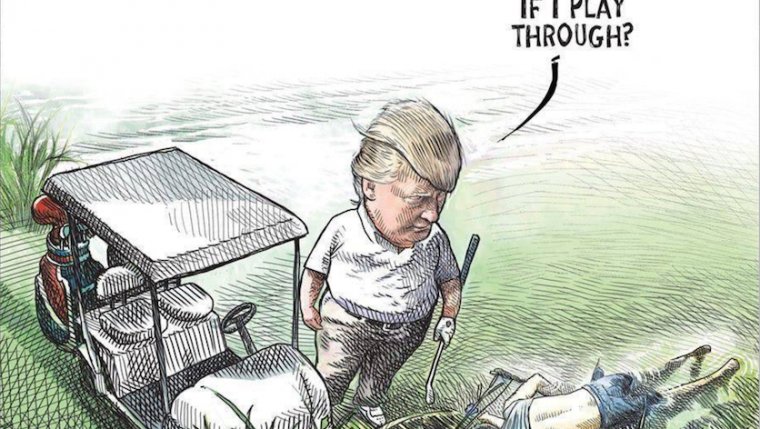 Until recently, Michael de Adder was employed as a cartoonist with Brunswick News Inc. (BNI), a firm owned by the Irvings, one of Canada’s richest families.

While de Adder’s art has yet to achieve the notoriety of an artist like Banksy, his work can pack a wallop. It seems de Adder’s efforts, particularly the latest, to direct well deserved scorn at Donald Trump may have knocked him to the unemployment line. His erstwhile employer denies any connection to his work and claims de Adder’s replacement was planned a while back.

I cannot definitively determine whose version is closer to the truth. But we can look at certain facts. First, de Adder claims that BNI refused to publish any cartoons critical of the Irving empire. He also claims that the BNI chain also declined to publish any cartoons critical of Donald Trump. Looking through publishing records, it seems de Adder is right. The BNI chain seems to have shielded its owners and the US President form de Adder’s satirical jabs.

That raises important questions about potential conflicts of interest between the media and its corporate owner masters. In 2015, Aidan White, the head of the European Federation of Journalists said “there is a profound crisis of governments, politicians and a big range of global media corporations influencing news selection, setting the agenda for the media, putting pressure on journalists and trying to eliminate their power by cutting and restricting the media economy”. White would likely agree de Adder’s muzzling is an example of the crisis of control.

The Irvings are entitled to own a newspaper. In fact, in de Adder’s home Province of New Brunswick, the Irvings family controls virtually all print media. And if the Irving employees running their newspapers are refusing to tell stories that need to be told because it may bite the hand that feeds them, then there is indeed a profound crisis. And perhaps the mainstream media is deserving of the boorish criticisms levelled by Trump.

Putting corporate or political interests of allies ahead of public interest is and must be considered the highest order sin for a media outlet. While our media has not polarized into pro-Trump and opposition camps as has happened in the US, incidents such as de Adder’s dismissal necessarily leads to one asking how far behind are we?

Is it that we are already there but our media masquerades its independence better than its American counterparts? BNI’s actions in New Brunswick and the increasing propensity of some political parties and politicians to use outlets like Rebel “Media” certainly suggests that we are far down the path of allowing our media to become the instruments of deceit and coverup than we may care to admit.

A cartoonist is a visual satirist. A cartoon can synthesize a complex story into a single image and mobilize public opinion around an issue. That is the power of visual satire. It can expose the powerful to well-deserved public mockery and contempt. Satire can also express defiance, articulate our collective emotions and most importantly, move us to action. If the likes of the Irvings and Trump are shielded by a compromised, even corrupted media, we are denied the opportunity to see provocative satire that evokes thought, debate, and perhaps necessary action.

Michael de Adder’s work did all of that. For nineteen years, he drew cartoons. Evidently his employer tired of his efforts to act as the media should. And that is to report and draw without fear or favour. If the media abandons courage and free expression and yields to the powerful, it simply becomes a purveyor of propaganda, not the news. That that should concern and offend the sensibilities of every sensible Canadian.

We must insist if corporations are going to consolidate media holdings as the Irvings have, they must maintain an unbreakable separation between public interest and their corporate interests and the former must prevail every time. Corporations can own the media but cannot proceed to use that control to silence the fifth estate or treat it as an extension of their public relations departments. If we cannot find agreement on that point, perhaps we the citizens should demand stricter limits on corporate control of the media.

Michael de Adder deserves our support, not our indifference. The media and the powerful interests that silenced him deserve our contempt, not our silence. I hope one of Canada’s great cartoonists will create an image that conveys our support and contempt for each. Perhaps Michael de Adder will take up the challenge. Now that would be an appropriate parting word. 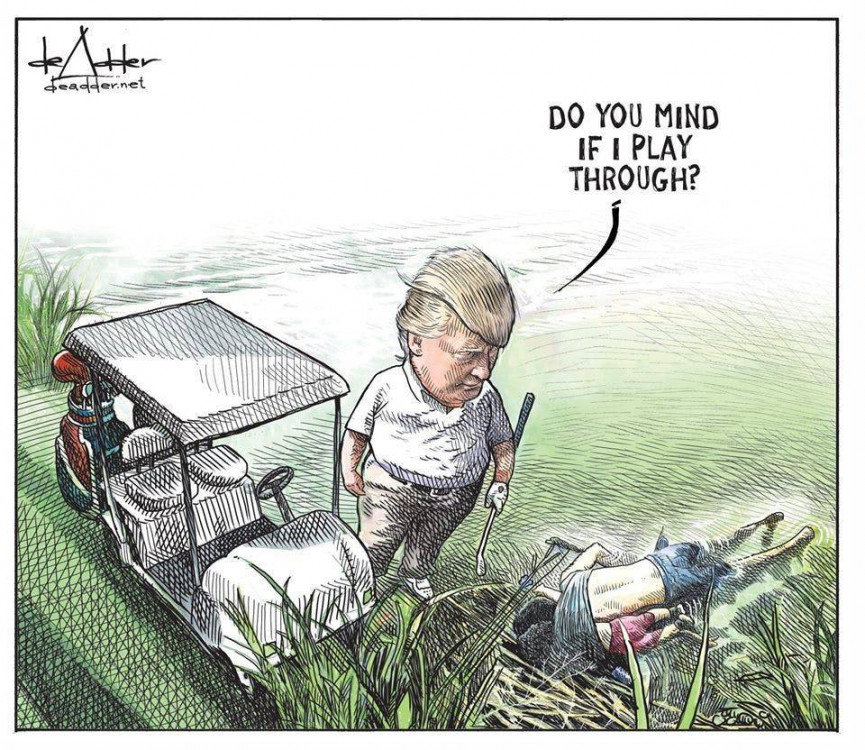