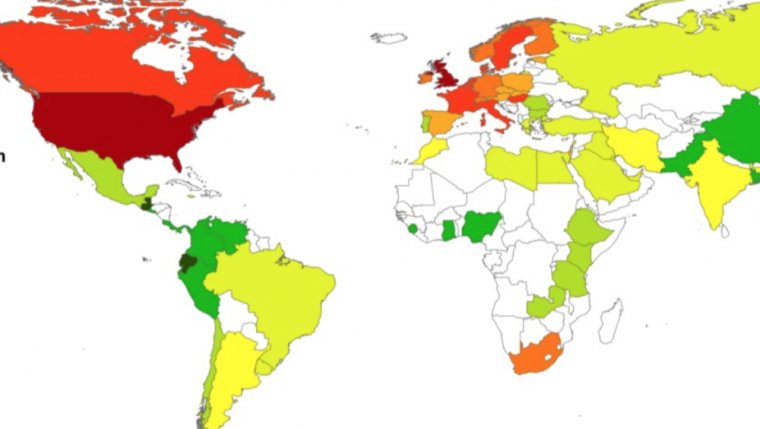 We live in an increasingly polarized world. Left and right, rich and the rest, liberal and conservative, climate change activists and deniers; these are some of the ways we define the opposing groups. But there is a more fundamental divide that simply boils down to how we see ourselves and our place in the world.

The polarization is really between those who focus on I and those who focus on Us. That applies across nations and within nations. Some nations and cultures emphasize collective interests over the individual (collectivism) while others believe that individual interests prevail over the collective (individualism). The notions of individualism and collectivism can apply to one person (human nature) as much as they do to organizations, regions, cultures and nations.

In fact, there is an Individualism Index (IDV) of nations. Western democracies tend to rank higher on the IDV while Asian, South American and African nations tend to skew towards collectivism. Not surprisingly, the Unites States of America is number one on the IDV scale with a score of 91. Canada’s score of 80 places it in a tie for 4th or 5th place with The Netherlands. Even the highest IDV European scores fall back into the 70’s.

Within populations as a whole, and without stating it as an absolute rule, people and political organizations on the liberal left tend towards collectivism while those on the conservative right tend towards individualism. That is, Liberals and Democrats in Canada and the US respectively, can be expected to be more collectivist than Conservatives and Republicans.

Of course, there is significant variation and the measures are not absolutes like a temperature scale. For example, democrats in the US can be further right and more individualistic than liberals in Canada. On the continuum, IDV ranks are highest in the US and Australia followed by Europe with much of the Southern Hemisphere in a more collectivist position on the IDV scale with scores in the mid 50’s.

When taken to the extreme, collectivism took the form of political systems like Soviet and Maoist communism and individualism took the form of Wall Street capitalism’s greed where one took all that could be taken without regard for anyone else. Both extremes have been destructive; one literally killing millions and the other consolidating billions into a few hands while exploiting billions and leaving them with barely enough.

Socially, collectivism focuses on group harmony, a common identity and group affiliation compared to individual identity, task or goal focus and an emphasis on him/herself and the immediate family in individualistic societies.

On the face of it, these are competing value systems. But paradoxically, they are actually deeply dependent. Even in the most individualistic society like the United States, I cannot function without the systems created by Us. After all, democracy is the ultimate exercise in collectivism.

No individual American truly makes it on his or her own because each has been supported by a system that lent safety, economic security and legal and educational systems that make individual success possible. Anyone can indeed make it in America but to say it was solely on their own, is a grand American myth.

Collectivist systems that suppressed the individual, eventually fell apart at the seams. They choked individual initiative, ingenuity and quest for innovation by forbidding reward proportional to individual effort. Marx’s “one according to his ability to one according to his needs” left every one poor, naked and hungry. In this century, the extreme collectivism has been defeated to history’s dust bin.

If the pursuit of happiness is simply an exercise of each man and woman being in it for themselves, the system will also eventually break. America is now a society of extreme wealth disparity and it is now severely polarized with the divided looking for someone to blame. Some blame the loss of individual rights while others the unfettered greed of the individual. The divide pits those who believe in the supremacy of I and those who think our survival will depend on Us. Breaking this deadlock will require a reconciliation between the two solitudes.

As Canadians, we also face this very question in the upcoming federal election. The two leading parties are offering an interesting but essential choice between individualism and collectivism; not the extreme kinds, but resetting the balance between the two. The Conservatives are offering individual breaks and the Party’s campaign platform is about “getting you ahead”. Key campaign platforms include individual tax cuts and smaller government.

In contrast, the Liberal Party’s “move forward” campaign is about more investments in systems that support certain classes of society. Their argument is that offering more support to economically disadvantaged population segments will create the environment conducive to more individual success. The idea is that a stronger Us will create more resilient I’s.

As an example, let’s look closer at carbon tax implemented by the Federal Liberals. It is a classic standoff between systemic consideration and its impact on the individual. The Liberals present the tax as neutral to the individual but essential for collective success. The Conservatives present it as yet another intrusion into individual pockets and promise its repeal. In its essence, the carbon tax debate pits I vs Us.

On most issues like this, there is usually evidence, facts and data we can rely on to resolve the conflict. The trouble is that facts and data are often secondary; we make decisions based on our underlying human nature. It is often not a question of right or wrong but how much of our individualism we are willing to compromise. And we seldom compromise if our comfort zone is encroached.

For Canadians the next federal election is about finding our sweet spot between these competing but dependent values. For the next twenty-one days, we are trapped in a hyperbolic chamber of campaign rhetoric from all parties. Very predictably, the Conservatives are most about I and the NDP most about Us. The Greens are a whole lot more Us on some issues but all over the map on others. The Liberals are keeping with their historic tradition of landing somewhere in the middle.

Each of the parties are competing for our attention by highlighting issues and platform promises they think will resonate with us and yield our support. In some cases, they will try to stoke our angers and in others, they will try to comfort our fears. But deep down, their efforts are, to varying degrees, about invoking the I within Us.

As we try to make some sense out of the noise, we would do well to remember that successful societies have never existed in either extreme of this continuum. History stands witness to that simple fact. We can agree that there will be a natural tension between the individual and the system with which the individual exists.

Our challenge is to collectively find that balance by casting an individual ballot which paradoxically, is the most singularly individual act.

Let’s hope we can find that fine balance that leaves us in a place where I can find comfort in being part of Us.