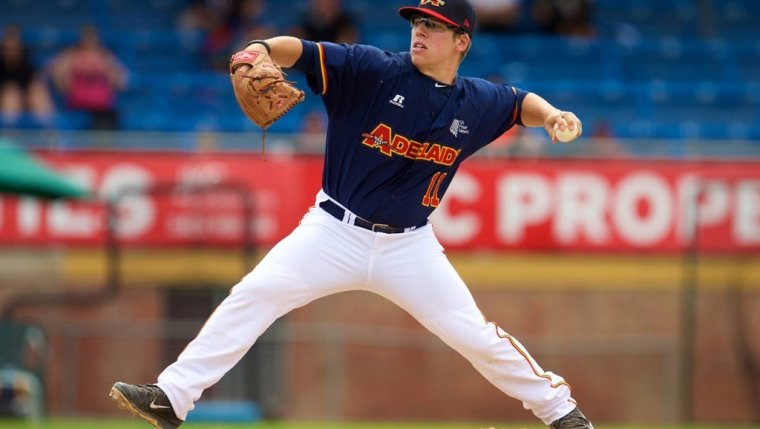 Wellander was 1-3 with three saves and a 2.27 ERA last season in 31 relief appearances for the Frontier League’s Joliet Slammers. The Largo, Florida native struck out 47 batters, walked only nine, and yielded just one home run across 35.2 innings pitched. Wellander did not allow an earned run in 25 of his 31 appearances, while pitching more than one inning on nine occasions. In 2016, Wellander posted a 2.23 ERA and allowed just one home run in 36.1 innings for the Frontier League’s Gateway Grizzlies.

“Jordan has done about all you can do in terms of having success in the Frontier League, and I’m very interested to see how his stuff and pitchability translate into the American Association,” said Goldeyes’ manager Rick Forney. “His WHIP (walks and hits per innings pitched) has been pretty impressive over the last two seasons.”

Wellander is entering his seventh season of professional baseball, and is 15-10 lifetime with 15 saves and a 3.22 ERA in 182 appearances (180 in relief). During his career, the 6-foot-3, 180-pound right-hander has averaged an impressive 9.4 strikeouts per nine innings compared to just 2.8 walks. After finishing his college career at Barry University (Miami Shores, Florida) in 2012, Wellander signed his first professional contract with the Sioux Falls Pheasants (now Canaries) where he was briefly teammates with Goldeyes’ centre fielder Reggie Abercrombie . The 27-year-old Wellander joined the Frontier League in 2013 where has finished with an ERA of 3.31 or better in four of the past five years. Wellander has excelled in pressure situations as a professional, holding the opposition to a .207 batting average with runners in scoring position, and a .136 mark with runners in scoring position and two outs.

Hartman was a combined 2-2 last year with three saves and a 4.19 ERA at two levels of the Los Angeles Dodgers’ organization. The Modesto, California native struck out 43 batters in 38.2 innings over 21 relief appearances for the Rookie Pioneer League’s Ogden Raptors and the High-A California League’s Rancho Cucamonga Quakes. Hartman worked more than one inning in 14 of his 21 combined relief appearances, and helped the Raptors win the Pioneer League championship.

“Zach has had a lot of success in his career to this point,” said Forney. “His strikeout-to-walk ratio is fantastic, and his hits per innings pitched leads me to believe he has the ability to fill many roles.”

Hartman originally signed with the Los Angeles Angels as a non-drafted free agent in 2015 after spending five years at the University of Nevada-Las Vegas (Las Vegas, Nevada). The 6-foot, 195-pound Hartman owns a career 7-4 record with 16 saves and a 3.19 ERA during his three seasons of professional baseball. In 132.2 lifetime innings, Hartman has struck out 142 batters, walked 42, and allowed only three home runs. The 26-year-old right-hander was traded from the Angels to the Dodgers just prior to the start of last season. Like Wellander, Hartman has been effective in crucial situations, holding the opposition to a career .206 average with runners in scoring position. Hartman has also proven durable, having pitched more than one inning in 45 of his 85 career relief appearances.

Tols last pitched in North America in 2016 where he was 5-4 with a 4.18 ERA in three starts and 24 relief outings for the Kansas City T-Bones. A native of Adelaide, Australia, Tols struck out 60 batters and allowed just four home runs in 60.1 innings. Tols is currently pitching in his home country for the Australian Baseball League’s Melbourne Aces. The 5-foot-7, 165-pound lefty is a combined 19-7 with a 2.34 ERA in the ABL since 2010. Tols was a member of the Australian National Team during the 2017 World Baseball Classic.

Tols has three years of experience pitching in North America, first signing with the Pecos League’s Trinidad Triggers in 2014, and then spending the next two seasons with the T-Bones. The 28-year-old Tols is 12-4 lifetime with a 3.99 ERA in 14 starts and 54 relief appearances. Tols has averaged 8.7 strikeouts per nine innings as a professional, while holding left-handed hitters to a .196 average. Tols pitched two seasons of college baseball at Rockhurst University in Kansas City, Missouri.

“I’m thrilled to add Jordan, Zach, and Josh to our staff,” said Forney. “It’s no secret that if you want to compete for the American Association title, you need to have good pitching, and lots of it. I’m not talking about just having excess arms, but having an inventory of quality pitchers.”

Additionally, the Goldeyes have officially signed right-handed pitcher Cameron McVey to a contract, while releasing catcher Tanner DeVinny. McVey was reacquired from the Lincoln Saltdogs last week in exchange for a player to be named later and cash considerations. DeVinny signed with the Goldeyes last July and appeared in 13 games as a true rookie.

The Goldeyes now have seven players under contract for the 2018 season. American Association clubs may carry up to 28 players during spring training, which begins May 6th.