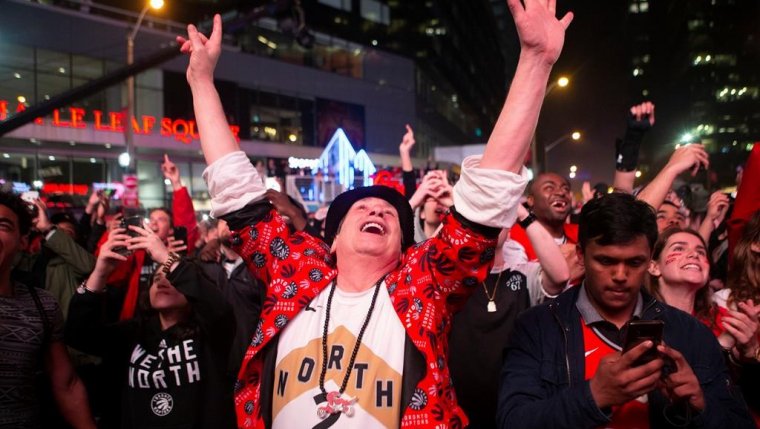 Toronto police say it’s "impressive" that they didn’t have to arrest anyone after the Raptors’ historic win on Saturday night sent thousands of celebratory fans careening onto the streets.

The roar of fans cheering and chanting "We the North" and "Let’s go Raptors" flooded the downtown core after Canada’s sole NBA team earned a spot in the final for the first time in franchise history.

On social media, videos emerged of fans running into intersections and dancing on top of streetcars and buses, but on Sunday, police spokeswoman Katrina Arrogante confirmed that not a single arrest was made.

"It’s impressive. It certainly is," said Arrogante. "We’re amazed — police were there to keep the peace and that’s exactly what happened."

The festivities ramped up shortly after 11 p.m. when the Raptors defeated the Milwaukee Bucks 100−94, becoming the Eastern Conference champions and advancing to the NBA Finals.

Earlier in the day, fans lined up for hours to pack Jurassic Park, but a thunderstorm prompted Toronto police to post on Twitter that they wouldn’t open the fan zone on schedule because of safety concerns. The ban was lifted an hour later and Jurassic Park quickly overflowed with Raptors supporters who braved the rain to watch the game outside Scotiabank Arena.

There was a heavy police presence as some fans got rowdy, but officers say everyone managed to stay out of trouble as the celebrations continued.

Arrogante said officers were called to various spots around the city to assist with crowd control and directing traffic, but no one was arrested. She said she saw videos of fans dancing on streetcars but said there were no reported injuries, and in terms of arrests: "nothing came out of that," she said.

"It turned out better than it could have," said Arrogante.

She said police will be out again Thursday night when the Raptors play the Western Conference champion Golden State Warriors in Game 1 and she hopes fans will continue to have fun safely.

Arrogante said fans planning on drinking should get a designated driver or take public transit.

"We’re reminding anyone that is going to be celebrating or taking part in any events forthcoming of the playoffs, is to be respectful."