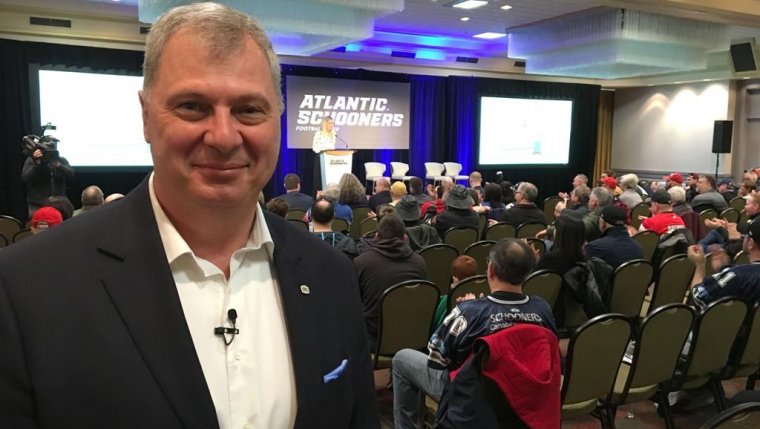 HALIFAX — A plan to establish a CFL franchise in Atlantic Canada took a big step forward Saturday when Schooners Sports and Entertainment announced it had struck a tentative deal with a key property owner in the Halifax area.

The business group confirmed it had signed a letter of intent with Canada Lands Company outlining a potential deal that would see a multi−use sports and entertainment hub built on the Dartmouth side of Halifax harbour.

CFL commissioner Randy Ambrosie, who was on hand for the announcement in Dartmouth, said he was thrilled with the agreement.

"I feel that we’re closer than we ever have been to making this dream a reality," Ambrosie told about 100 boisterous CFL supporters, some of them wearing jerseys and goofy hats.

Anthony LeBlanc, one of the group’s founding partners, said a scaled−back, $130−million "community stadium" in Shannon Park would be made available for youth, amateur and recreational sports for about 300 days each year.

"I’d say we’re about 90 per cent done for ... the proposal to go to (the Halifax Regional Municipality) and to the province," he told the crowd.

LeBlanc confirmed talks with Canada Lands had taken longer than expected, which is why the group has yet to submit a formal proposal to the local or provincial governments.

"When you’re looking at the acquisition of land, it takes time," LeBlanc told the crowd. "People have been questioning why they haven’t heard much since November."

LeBlanc said he was reluctant to predict when that proposal would be submitted.

A final decision on the project is expected by the end of June.

LeBlanc has said the Atlantic Schooners are expected to start playing in 2020 in Moncton, N.B., while a new stadium is being built in Dartmouth. Moncton Stadium has 10,000 permanent seats but could be expanded to 20,725 with temporary seating.

The proposed Dartmouth facility, which would include a sports dome for the winter months, would also be made available to local schools and community groups for daytime weekday use, he said.

To help get those events organized, Schooners Sports also announced it had signed a formal partnership with Sport Nova Scotia, a non−profit group that advocates for more than 50 provincial sport organizations.

"We’re going to be able to program this facility for all of the days that the CFL team is not using it — or there aren’t any large events, like concerts," he said. "This agreement will give us the opportunity to get more kids in the game."

"From the day our discussions started, it wasn’t just going to be about football — it was going to be about community, and making it a destination," said Bowser, who grew up in Shannon Park, now an abandoned neighbourhood that was once dominated by military housing.

"We think this will be a reason for people from across the country to come out here."

LeBlanc said the latest version of the stadium plans calls for 12,000 permanent seats for community events, with an option to add another 12,000 seats when the proposed Atlantic Schooners compete with other CFL teams.

Ambrosie, who was in Dartmouth to conclude a cross−country tour promoting the CFL, encouraged football fans to push decision−makers to support the Schooners proposal.

"Give them a big bear hug, don’t let them go until they say yes," said Ambrosie, a big man who played nine seasons in the CFL. "Eventually, they are going to have to succumb to your will."