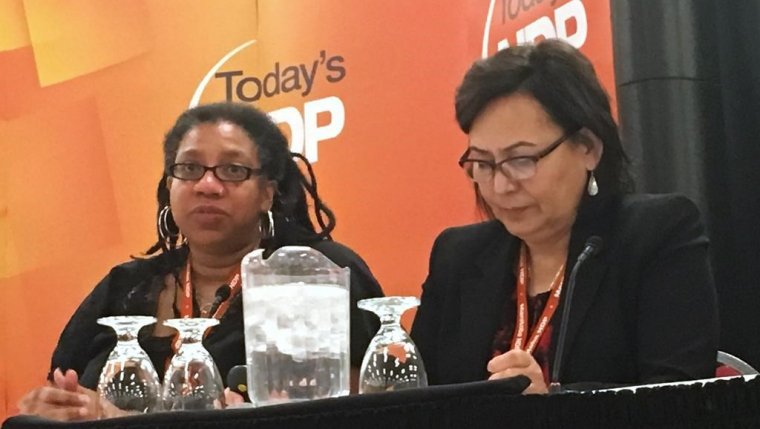 BRANDON — Manitoba’s New Democratic Party has suffered for years from a "toxic culture" of sexual harassment and bullying where victims have been afraid or unable to seek help, according to a review released at the party’s convention in Brandon.

"The atmosphere was overly sexualized, sexist and misogynist, and there was often a different standard for women than there were for men," Kemlin Nembhard, one of two commissioners who have been examining the issue, told some 200 delegates at the party’s annual convention Saturday.

"The span of years that (people we talked to) have been or were involved with the party was really diverse, and yet the patterns in the work atmosphere, in the general culture and environment ... were pretty consistent."

The Opposition party set up the commission earlier this year, after several women came forward with allegations they had been subjected to harassment and unwanted touching by former NDP cabinet minister Stan Struthers.

Struthers, who left politics in 2016, has rejected interview requests but issued a brief statement in which he apologized for any inappropriate behaviour.

The commission’s report does not name any alleged victims or perpetrators, nor would the commissioners say how many people came forward, or how many alleged perpetrators there were. They would only say they had heard from former politicians, party workers at the legislature and others.

Nembhard told the convention people told her they felt they had no choice but to put up with harassment and other inappropriate behaviour.

"It was generally an atmosphere of fear and loyalty. Fear of certain senior staff members was noted ... and then there was the atmosphere of loyalty at all costs (where) one must always remain loyal to the party to the exclusion of all else, regardless of what was happening."

The commission, which examined the party going back more than a decade, including the years when the NDP was in power, also found that:

— There was a toxic atmosphere where inappropriate behaviour was enabled by key party members.

— There was an "Old Boys club" where some people were excluded from decision−making.

— There was pressure to take part in drinking and parties, and inappropriate sexual activity inside the legislative building.

— Some women have left the party while others have decided not to enter political life.

"If 50 per cent of the population are feeling isolated and can’t participate in the party, that really questions us as a democratic institution," Nembhard said.

The commission made several recommendations, including mandatory anti−harassment and human resources training for politicians and senior staff and a formal process to allow victims to come forward.

NDP Leader Wab Kinew said he wanted to enact all the recommendations and the convention delegates voted to adopt them.

"I’m apologizing both for the direct harm you experienced, but also for the environment that silenced your voices for too long," Kinew told the crowd.

Saltel−Allard said Saturday she was pleased with the report’s findings.

"My goal with coming forward has always been to see change — to make sure no one else has to feel belittled, disempowered or harassed like I did, almost 8 years ago. And I can honestly say that my goal has been achieved!" she wrote on her Facebook page.

"Thank you to the Manitoba NDP for finally listening to my story. I can attest that the report findings are accurate."

Kinew took over as party leader last September and has tried to show he has changed in terms of his personal treatment of women.

Kinew also continues to face accusations from a former girlfriend that he assaulted her in 2003. The charge was stayed and later dropped, and Kinew has denied assaulting the woman. But in an interview with The Canadian Press last fall, she stood by her allegation that Kinew threw her across a living room.