Racist Tirade Caught on Video at a Denny's in Lethbridge 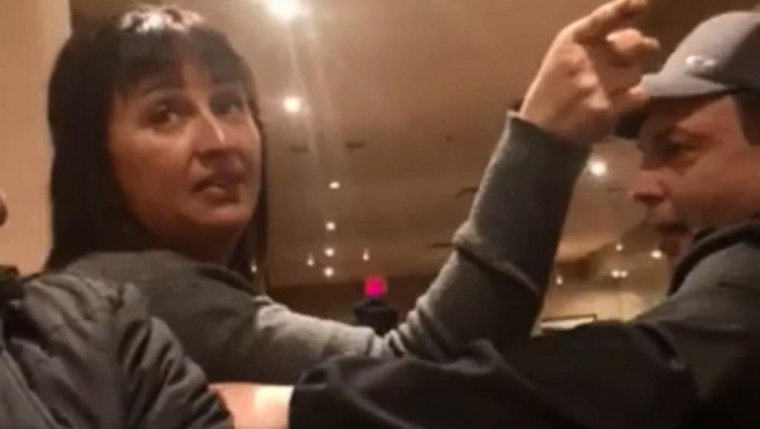 LETHBRIDGE, Alta. — A Lethbridge man who was the target of a woman’s racist tirade at a local Denny’s restaurant says he’s never experienced anything like it in the 13 years he’s lived in the southern Alberta city.

Monir Omerzai posted a video of the heated exchange on Facebook Tuesday saying "every culture and every human being should be respected.

"It does not matter what colour you are (or) where you came from," he wrote.

The video shows a woman turning toward a group in the next booth and unleashing a profanity−laden rant, telling them to go back to where they came from and saying they don’t pay taxes.

The people at the table try to interject.

As the exchange escalates, the woman gets up to kneel on her seat overlooking the group’s booth.

"You’re not dealing with one of your Syrian bitches right now," she says. "You’re dealing with a Canadian woman and I’m not going to be talked down to by you."

At one point, she appears to lunge at the table as a man beside her holds her back.

By Wednesday afternoon, it had been viewed more than 260,000 times and shared nearly 6,000, with several commenters expressing anger, embarrassment and dismay.

Omerzai told CTV News that police said there was nothing they could do and that the restaurant asked them to leave.

"The food just arrived, it was fresh and then we looked at the restaurant owner and then they told us we have to pack our food and leave now," he said. "We were not intoxicated, we were not anything. We were just normal people going out there, being hungry."

The Denny’s restaurant and the chain’s corporate office did not immediately respond to requests for comment.

Kelly Pocha of Cranbrook, B.C., confirmed to Lethbridge News Now that she was the woman in the video.

She told the news outlet she was in town visiting three weeks ago. She said she had been out drinking and she went to Denny’s with her husband for a late−night bite.

Pocha said the men were looking at her and laughing, while saying things in a language she didn’t understand.

Pocha, who described herself as a hardworking mother of three, admitted what she said was racist and said it doesn’t reflect who she is.

"If I could rewind and take it back I would. But I can’t."

Lethbridge police say they are looking into the verbal dispute.

The video made waves at the Alberta legislature after Stephanie McLean, the minister for the Status of Women, offered a qualified defence of the woman on social media.

"She was definitely not right and was saying horrible bigoted things. That being said −− (am) I hearing right? At the beginning of the video does the man on the left say to her ’you ask to speak.’ Then says something about her mother?" McLean tweeted.

"My tweet shouldn’t have implied there could be an excuse for the behaviour in that video," she wrote. "There is no excuse!"

Mayor Chris Spearman also condemned the racist rant and said Lethbridge has gone out of its way to welcome newcomers from all over the world.

"They’re part of who we are. We are a growing, progressive, modern city and I’m disappointed to see an incident like that occur," he said.

"That kind of language and bigotry and racism have no place in Canada," he said, adding his group has reached out to the men involved to offer support.

— By Lauren Krugel in Calgary