Pilots Cause of 3 Close Calls at San Francisco Airport 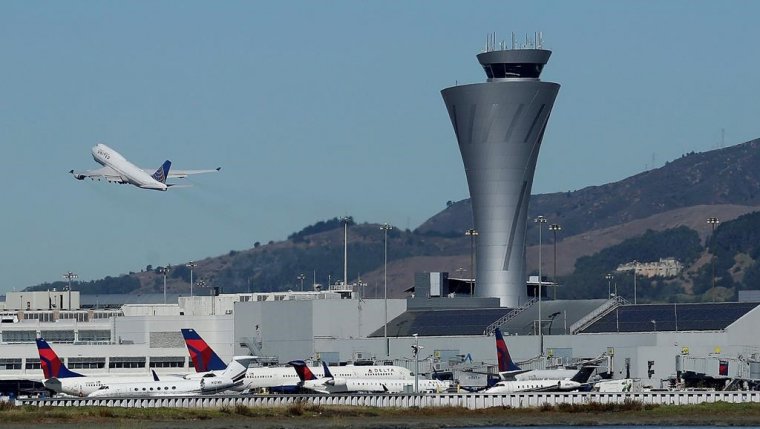 SAN FRANCISCO — Pilot error was responsible for three of the five close−calls involving aircraft reported in the past 16 months at San Francisco International Airport, federal authorities said Wednesday, while another incident was blamed on an air traffic control problem.

In most incidents, planes lined up to land on the wrong runway or taxiway at the airport, a notoriously difficult place for landings because of the close proximity of the two runways.

In one case, an Air Canada flight almost landed on a taxiway jammed with four planes awaiting departure.

Air Canada pilot Dimitrios Kisses told investigators he aborted the landing on July 7, 2017, because "things were not adding up," the National Transportation Safety Board said in a report.

Moments later, an air traffic controller told him to pull up.

Longtime American Airlines pilot Chris Manno said the runways at the airport require pilots to be "on top of your game" when landing.

"When you are operating with what you call ’reduced lateral separation,’ which is what’s at San Fran and Minneapolis and other airports in the country, things are more critical and communication is key," Manno said.

"If there is a screw up with communication there is going to be a problem," he added.

The Federal Aviation Administration detailed other incidents in a separate report.

It said a SkyWest pilot was given taxiing instructions on Dec. 14, 2016, and correctly read them back, but then turned onto the wrong taxiway.

The aircraft stopped 65 feet from the edge of the runway, where a United Airlines Boeing 737 was taking off.

On Oct. 22, 2017, another Air Canada flight was cleared to land but a tower controller then instructed the crew multiple times to circle because he was not certain that a preceding arrival would be clear of the runway.

The FAA report says "the Air Canada crew did not acknowledge any of the controller’s instructions. A supervisor then used a red light gun to alert the crew to go around" until the other plane was off the runway.

Investigators found the crew inadvertently switched from the San Francisco tower frequency to a ground frequency after receiving landing clearance. The incident "resulted in several actions" that were not specified in the report.

Three months later, a traffic controller mistakenly cleared a Compass passenger jet to land on a runway where a Virgin America plane was waiting for takeoff, the FAA determined.

The most recent near−collision occurred on Jan. 9 when an Aeromexico passenger jet was ordered to abort a landing as it descended toward a runway occupied by another commercial jet.

The FAA determined the incident was caused by pilot error and said Aeromexico provided more training to its pilots on flying into San Francisco, including distributing a safety alert to its pilots about the incident.

Since then, the airport has reinforced its ground radar system, added more lights and shut down a confusing taxiway, the FAA said.

The FAA re−certified the airport last week after an in−depth review of its operations, airport spokesman Doug Yakel said.

The National Transportation Safety Board is still investigating the July 2017 incident in which the Air Canada flight almost landed on a taxiway occupied by four other planes.

It hasn’t concluded who was at fault, but the voluminous report released Wednesday includes interviews with the pilots, air traffic control and a chilling video clip of the aborted landing that shows the A320 with 140 people aboard coming close to another plane before turning its nose up and flying away.

The pilot and co−pilot reported being tired after flying from Toronto, according to the NTSB report.

The report also says co−pilot Matthew Dampier twice failed to earn a promotion to captain after getting unsatisfactory reviews during the process. Instructors said he made imprecise approaches before landings and seemed to lack understanding of situations and surroundings.

A call seeking comment from The Air Canada Pilots Association, the union that represents the airlines’ pilots, was not returned.

Air traffic controller Brian Delucchi told investigators that the flight path of the plane looked "extremely strange" before he ordered the crew to abort its landing and circle the airport for another attempt.

He was the only one working that night, and the agency later issued new rules requiring two controllers in the airport tower during busy late−night periods.

Delucchi said the plane dropped from his radar screen on approach, an unusual occurrence that he said didn’t alarm him because he was tracking the plane with binoculars.

Federal officials subsequently issued new rules for nighttime landings and control−tower staffing. Now, when an adjacent runway is shut down at night, air traffic controllers will no longer let pilots make so−called visual approaches to land. Instead, they must use instrument landing systems or satellite−based systems to line up for the correct runway.