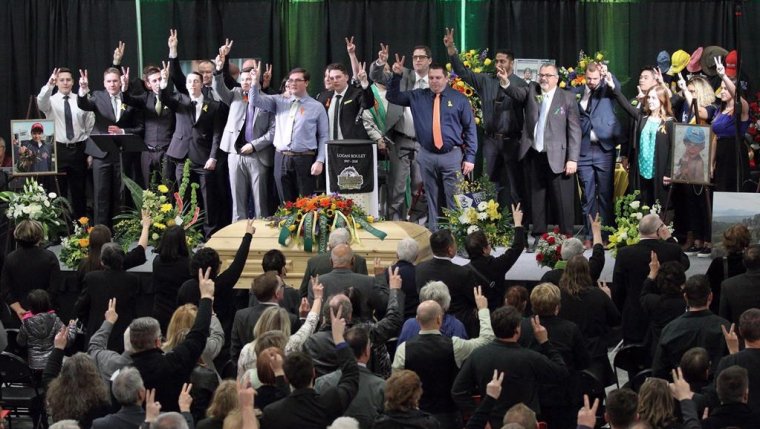 OTTAWA — Nearly 100,000 Canadians signed up to become organ donors after learning a victim of last month’s Humboldt Broncos bus crash had signed a donor card just weeks before the crash — and wound up saving six lives.

According to Canadian Blood Services there were 99,742 registrations in April alone, and that number only includes provinces that have online registration: British Columbia, Alberta, Manitoba, Ontario, Quebec, and Prince Edward Island.

The other provinces reported receiving a lot of phone calls from people inquiring about how to register.

Jenny Ryan, a spokesperson for Canadian Blood Services, called it an "extraordinary show of support for organ and tissue donation," and said the tragedy inspired people to be more aware.

She noted that the spike in organ donation registrations also occurred during a week in April that’s dedicated to national organ and tissue donation awareness.

Logan Boulet signed a donor card after his 21st birthday, several weeks before the bus carrying him and the rest of the Humboldt Broncos hockey team collided with a tractor trailer in rural Saskatchewan. He was among the 16 people killed in the crash; another 13 were injured.

In Ontario, there are typically 42 online organ donation registrations a day, but since the tragedy that number has jumped to almost 800 registrations per day, according to Ronnie Gavsie, president of Ontario’s organ and tissue donation agency, Trillium Gift of Life.

The bus crash "jolted" Canadians into registering as donors, Gavsie said in an interview.

"We can only measure online, but it just jolted people out of their complacency and they registered consent and that will translate into thousands of lives saved, not today, but eventually."

In an appearance Monday before the House of Commons health committee, Gavsie recommended that the federal government initiate a national public education campaign on TV and radio to help change the culture around donor registration.

"Donor families tell their stories and it’s so meaningful. I think it is the most thrilling life−saving opportunity that one human being can give to another."