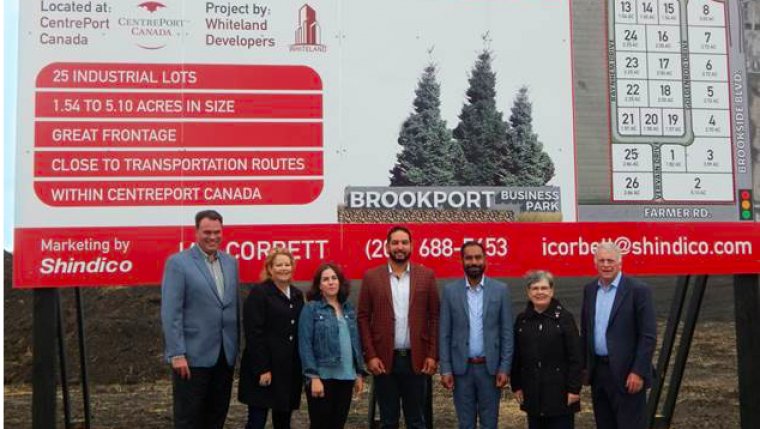 WINNIPEG - A new Business Park in a prime location will soon be on the market attracting businesses to our City, The BrookPort Business Park (“BrookPort”).

The new $26 million industrial park is being developed by Whiteland Developers and brokered by Ian Corbett, Associate Broker, Shindico Realty. Companies are expected to start to take possession of lots in late 2018.

Whiteland is owned by Satpal Sidhu and Amritpal Jhand, business partners with extensive experience in real estate. They brought several developments to market in Saskatchewan before turning their focus to Manitoba this year.

“With so much development occurring at CentrePort over the past few years, we felt the timing was right to invest in a large scale project in our home province.” said Satpal Sidhu, President, Whiteland.

“We chose to name the park by referencing its prime location at CentrePort along Brookside Boulevard. BrookPort will be an ideal location for manufacturing, distribution and transportation-related businesses.” said Amritpal Jhand, Vice President, Real Estate Services, Whiteland.

“We are very pleased that BrookPort will be on the market in the coming months,” said Diane Gray, President & CEO, CentrePort. “As one of our Strategic Marketing Partners, we will work closely with Whiteland to connect them with prospective clients as well as local businesses who can help them build their park as it develops.”

“BrookPort is a welcome addition to the growing business community in Rosser at CentrePort,” said Reeve Frances Smee, Rural Municipality of Rosser. “We have worked closely with Whiteland as they prepared the park, and we’re pleased to see full service extensions generating such a fantastic market response.”

Features of the BrookPort Business Park include:

 Prime Location: The Park is located in CentrePort North in the Rural Municipality of Rosser, and has excellent road connections for truck distribution/transportation - situated west of Brookside Boulevard (Route 90) and south of the planned Chief Peguis Trail extension

 Fully-Serviced: Water and wastewater servicing will be in place in early fall, and all lots will have Hydro/gas/telephone/internet at the lot line along paved roads

 Streamlined Approval Process: Companies that locate within the Park can take advantage of the Special Planning Area, which streamlines the land-development approval process, allowing businesses to have cost and planning certainty, transparency and speed to market

CentrePort Canada is a 20,000-acre inland port and Foreign Trade Zone. Located in the heart of North America, CentrePort connects to major national and international trade gateways and corridors, and is the only inland port in the country with direct access to tri-modal transportation – extensive truck, rail and air cargo operations.

To date, 55 companies have either built or are building new operations at CentrePort, including Rosenau Transport, Imperial Seed and Fort Garry Fire Trucks. CentrePort is also working with private developers and companies on new investments on over 1,000 acres within the inland port that have been sold or conditionally sold over the past 12 months.