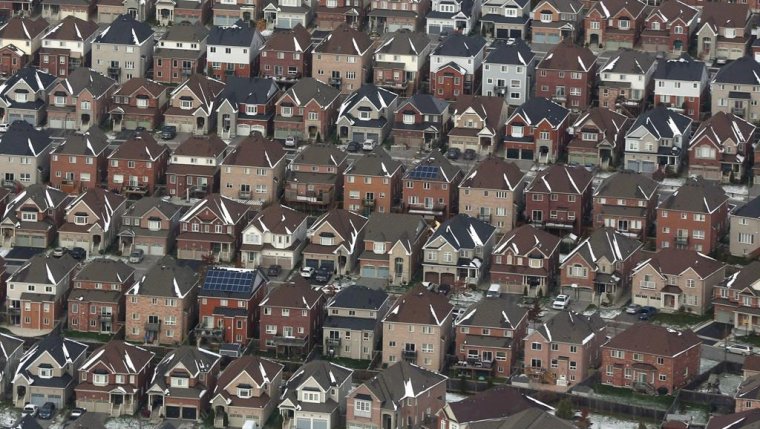 TORONTO — The Canadian Real Estate Association said national home sales sank 13.9 per cent year−over−year to the lowest level in more than five years in April, just as the number of newly−listed homes fell to a nine−year low for the month.

The decreases amount to a 2.9 per cent drop in sales between March and April, bringing the total to 36,297. During that same time listings fell to 67,616, taking a 4.8 per cent hit — a sign that the flurry of activity that usually kicks off the spring real estate market has failed to materialize.

CREA attributed the subdued level of activity to the stricter regulations for uninsured mortgages that the Office of the Superintendent of Financial Institutions introduced on Jan. 1. Its president Barb Sukkau said the regulations have "cast its shadow over sales activity," while its chief economist blamed them for having "destabilized market balance for housing markets in Alberta, Saskatchewan and Newfoundland."

Similarly, activity was below year−ago levels in about 60 per cent of all markets, which was "overwhelmingly" led by B.C.’s lower mainland and markets in and around Ontario’s Greater Golden Horseshoe region.

CREA also said the country has experienced a decrease in the non−seasonally adjusted national average sale price, which dropped by 11.3 per cent year−over−year last month to just over $495,000.

That number is well below the April averages for markets in B.C. and Ontario that overheated last year, causing both provinces to spring into action to cool the sector. B.C.’s most recent budget introduced a speculation tax targeting both foreign and domestic buyers not paying tax in the province. Last April, the Ontario government aimed to quell its roaring markets with expanded rent controls, a plan to ensure property tax parity for new apartment buildings and legislation that would allow Toronto and other municipalities to implement a vacant homes tax.

Following those measures, CREA said April’s non−seasonally adjusted average home price in Greater Vancouver was just above $1 million, in Toronto it was $804,584, in the Fraser Valley it was $780,736 and in Victoria it hit $703,592.

Those numbers were much higher than those experienced in Newfoundland and Labrador, Saint John, Sherbrooke, Saguenay, Quebec, Gatineau and Windsor−Essex markets, where the average home price in April hovered between $200,000 and $300,000.