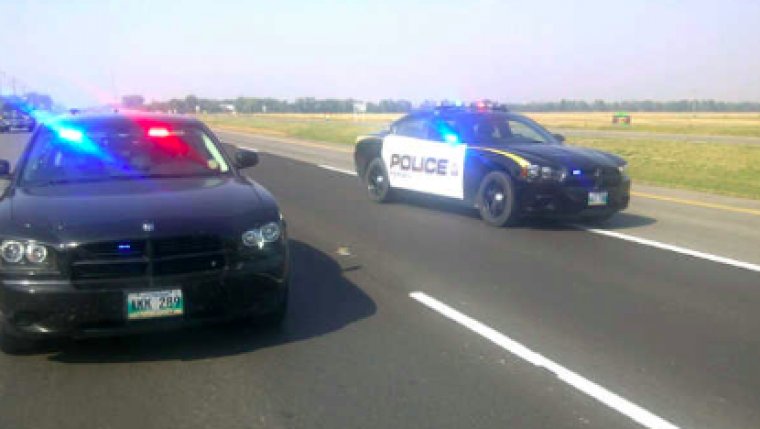 WINNIPEG - This is a round-up of the calls for service that Morden Police attended to during the week of December 16th to the 21st.

Police received a report of damage to a vehicle. On December 14th at 10:45 pm, the complainant advised that he was travelling on Mountain Street just north of Gilmour when a plastic cup was thrown from the window of an oncoming vehicle. The cup hit his vehicle damaging the driver’s side mirror. There are no suspects at this time.

Police issued a ticket for Use Cellular Telephone or other Hand Operated Electronic Device while Driving a Vehicle, which carries a fine of $672 and a three day driver’s license suspension.

At 7:45 pm, police were dispatched to a local establishment regarding a disturbance. Police attended and spoke to a male and female who were both highly intoxicated. The 54 year old male was arrested under the Intoxicated Persons Detention Act and lodged in cells until sober. He was released the next morning without charges. The 47 year old female was on conditions to not consume alcohol and abstain from communicating with the male. She was arrested and charged with two counts of Failing to Comply with her Undertaking and will appear in Morden Provincial Court in January. She was released the next morning when sober.

At 7:10 pm, police received a call regarding a female youth walking home on Mountain Street near Thornhill Street. A male pulled up beside her in a white van and repeatedly asked her if she wanted a ride home and invited her into his van as it was cold. She ran towards a local business and the vehicle drove away. The suspect vehicle was not located.

Police received a complaint regarding a male harassing a female and her roommates. This male has been following them around and yelling at them for the past year. Police cautioned the suspect who advised he would leave them alone.

While on general patrol, police conducted a traffic stop and subsequent checks revealed the driver had a suspended license. The driver was issued a ticket for Drive While Disqualified which carries a fine of $672 and his vehicle was impounded for 30 days.

At 1:00 pm, police received a call from a driver who was following a vehicle that was all over the road. The witness followed the suspect vehicle into a local drive through where police observed the vehicle to pull into a parking stall. Police pulled in behind the vehicle and activated their emergency lights. After speaking to the driver, police determined that he would be required to complete a field sobriety test. The driver failed the field sobriety test and was transported to the Morden Police Service for further testing by a drug recognition expert. The driver completed the testing and it was determined that he was impaired by drug. As a result, a 22 year old Altona resident has been charged with Operate while Impaired by Drug, three counts of Possession of a Controlled Substance and Fail to Comply with a Probation Order. He was released on an Undertaking to appear in Morden Provincial court in January.

Police were dispatched to a residence regarding a Mischief. Police attended and spoke to the homeowner who advised that his ex had smashed the backdoor window of his residence and left. Police located the suspect at her residence in Winkler where she was arrested and charged with one count of Mischief Under $5000. A 23 year old Winkler resident was released on an Undertaking to appear in Morden Provincial Court in January.

At 1:55 am, police were dispatched to a residence regarding a noise complaint. Police attended and spoke to the resident who advised he would turn the music down. No charges were laid as a result of this incident.

Police received a call regarding an intoxicated female acting in a suspicious manner outside a local business. Police attended and spoke to the female and it was determined she was intoxicated. She was arrested under the Intoxicated Persons Detention Act and lodged in cells until sober. She was released without charges.

At 2:05 pm, police were dispatched to a traffic accident at the corner of Stephen Street and 7th Street. A black Toyota Corolla attempted to turn left at 7th street and slid into a parked car and tree. The driver of the vehicle was checked over by paramedics and released with no injuries. Her vehicle was towed from the scene.

At 5:05 pm, police were dispatched to a traffic accident at the intersection of Thornhill and Stephen Street. A blue Hyundai Tucson rear ended a white Ford F150 and neither driver was injured. Morden Fire and Rescue assisted as the Tucson was leaking fluids. No charges were laid as a result of this accident.