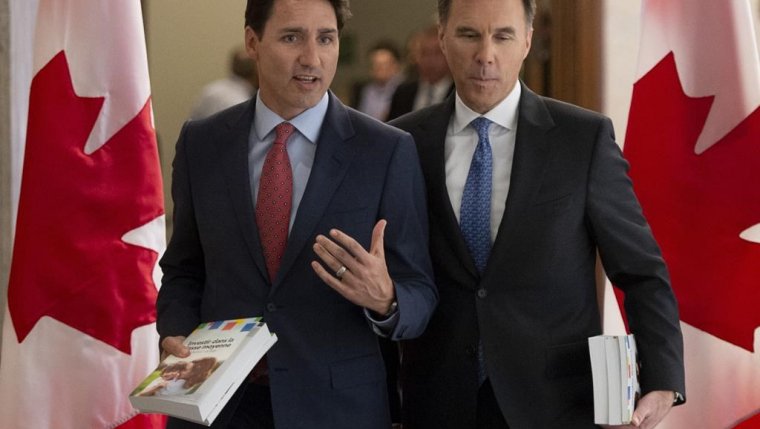 The $3.65 billion the government is setting aside includes $2.15 billion to help farmers who lose income because of trade deals with Europe and countries on the Pacific Rim, both of which make it easier for foreign egg, dairy and poultry producers to enter the Canadian market.

That is in addition to a $250−million, five−year fund established in 2016 to compensate dairy farmers for the European Union deal.

The budget earmarks $1.5 billion for farmers who lose money when they sell their production rights in the supply−management system, which limits egg, poultry and dairy production in Canada. To gain the right to sell supply−managed products, farmers have to buy "quota," often from existing producers who want to leave the industry.

The system also limits foreign products by slapping steep tariffs on imports beyond a certain level, which raises their price at the grocery store and makes them less attractive to consumers. Allowing more foreign−produced food into the Canadian market will increase competition for products from Canadian farmers.

"To ensure that Canada’s dairy, poultry and egg farmers can continue to provide Canadians with high−quality products in a world of freer trade, we will make available an income protection program for supply−managed farmers, along with a measure to protect the value of quota investments these farmers have already made," Finance Minister Bill Morneau said in his prepared budget speech.

The budget does not provide details on how or when the money will be distributed to farmers and producers, who have long railed against any move that would expand foreign involvement in those sectors.

But the government appears to be hoping the promise of compensation will provide a salve to supply−managed farmers, many of whom are clumped in key ridings in Quebec and Ontario and angry that the deals have weakened their grip on the market.

That could prove important for the Liberals, who will likely need a strong showing in the two provinces in this year’s federal election to have a hope of retaining power.

The budget also indicates more money could be forthcoming as the government works with industry "to address the impacts on processing, as well as potential future impacts of the Canada−United States−Mexico Agreement."

The North American deal, which will succeed NAFTA, has yet to be ratified and come into effect. That deal is the third free−trade agreement in which Canada agreed to open its supply−managed sectors, which emerged last year as a favourite target of U.S. President Donald Trump, particularly the dairy sector.

Supply management has long been hotly debated in Canada.

Proponents say the system keeps the market from getting saturated, which keeps prices stable and ensures steady incomes for farmers while protecting food safety, ensuring higher−quality products and eliminating the need for direct subsidies.

Critics say it drives up the cost of dairy, eggs and chicken for consumers, which has a disproportionate impact on low−income families. The system has been a frequent target in — and barrier to — past free−trade negotiations.

Successive federal governments for decades nonetheless resisted opening Canada to more tariff−free imports from other countries, in part because of the political implications.

But when Stephen Harper was prime minister, the Conservatives opened the door to change when they agreed to ease restrictions on European cheese imports through the Canada−European Union trade deal, which was signed and came into force under the Trudeau Liberals.

Ottawa then agreed, in the 11−country Trans−Pacific Partnership trade deal, to give participants more access to Canada’s dairy, egg and poultry markets.