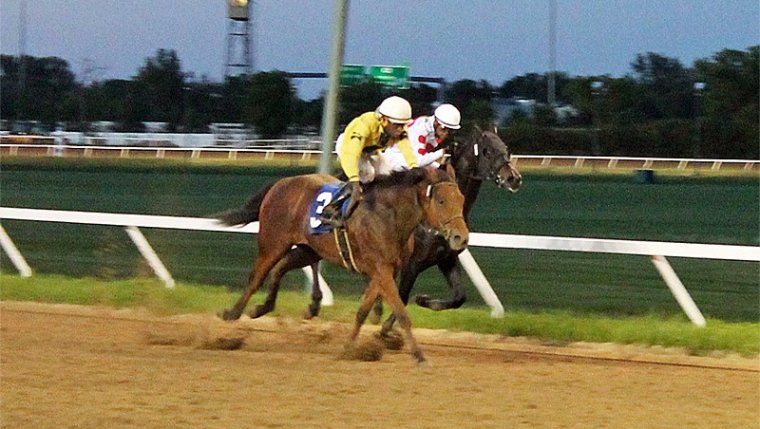 After a sensational Canada Day celebration, the folks at Assiniboia Downs finally get a few days to take a breath. After all, last weekend’s racing was a Plentiful Wonder with a full house and a great big bang.

Running in front of a near-capacity crowd on Canada Day, with the grandstand nearly full and long lines at the betting windows, Canada Day was a huge success at the Downs. Featuring a rare Sunday night of racing, complete with fireworks, it’s hard to find a better place to spend Canada’s big day.

Now, however, it’s time to take a brief respite. There will be no Wednesday racing this week and live racing won’t return until Friday night, but still, what a weekend at Winnipeg’s busy thoroughbred track.

“Despite the sketchy weather, Canada Day was a complete home run,” said ASD CEO Darren Dunn. “I have not witnessed that kind of crowd on site here since the early 1980’s. That we finished the night off with a bang through eye-catching fireworks seemed only appropriate. The supportive comments from patrons about their experience on Canada Day at the Downs was almost overwhelming – we will do this again next year I can promise that.”

The big simulcast race last weekend was the 159th running of the Queen’s Plate at Toronto’s Woodbine Race Track. The first jewel in Canada’s Triple Crown was won by Wonder Gadot -- the best filly in the country.

“The stakes race action on Saturday was top shelf,” said Dunn. “The filly that took the Queen’s Plate, Wonder Gadot, is truly first class as evidenced by the fact that she almost beat the top three year old filly in the world, Monomoy Girl, in the recent Kentucky Oaks. She was a handful for the competition in Toronto and won with something left. Look for her later in the year in the Breeders Cup.”

The big live race this weekend was No. 6 on Saturday night as 10 horses went to post in the $27,500 R.J. Speers Stakes. With an early inside trip and a nice rally outside, Tyrone Nelson, on Manitoba-bred Plentiful, came from off the pace to beat Hey Bro and Chavion Chow to the wire. Plentiful, trained by Murray Duncan, won last year’s Manitoba Derby.

“In the R.J. Speers, the powerful stretch rally by 2017 Manitoba Derby winner, Plentiful, to take the evening’s feature race now stamps him as the best horse on the grounds,” said Dunn. “With back-to-back stakes wins and the stakes races only going a further route of ground, he will wear the bullseye as the horse to beat here for some time.”

As we near the midway point of the 2018 card, there was a lot of movement in the jockey standings this weekend. Tyrone Nelson not only rode the RJ Speers winner, he also won two races on Sunday night to jump past Adolfo Morales (one win this weekend) and into second place behind the leader, Antonio Whitehall (one winner).

But the leaders are all looking back over their shoulders now. Kayla Pizarro, who had two wins on Saturday night, is fourth with 13 wins; Chavion Chow, who won back-to-back on Sunday, has 12 wins; Renaldo Cumberbatch, who had one win on the weekend, now has 11 winners and defending jockey champion, Rohan Singh, who rode two winners on Saturday night, now has nine.

Again, there is no racing on Wednesday night this week, but there is on both Friday and Saturday nights. As well, don’t forget, on Fridays, Saturdays and Sundays, the free VLT tournaments continue, starting at 8 p.m. each night. You can get into the draw for 10 chances to win $20 in free VLT spins. The top winner from each night participates in a month-end finale for more spins and $250 in prize money.

Remember, live racing this week is on both Friday and Saturday, with 7:15 post parades on both nights.