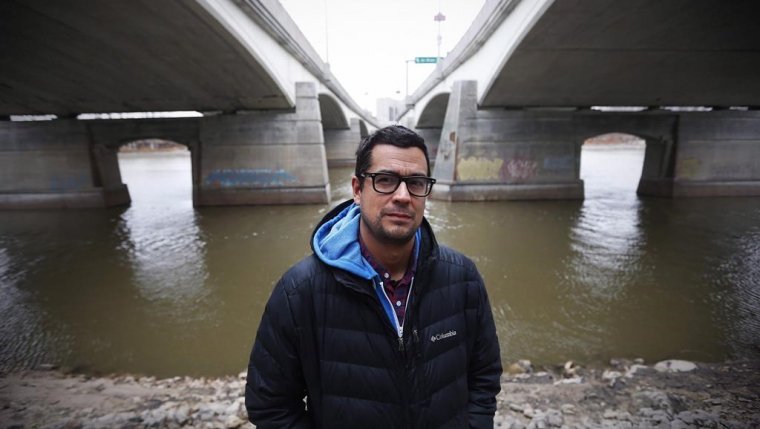 Edmonton Public Schools says it’s taking down its book review site after a leading Indigenous author questioned why some of his graphic novels were on a not−recommended list.

David Alexander Robertson, a Governor General−award−winning author who lives in Winnipeg, said he went through the Edmonton Public School Board’s "Books to Weed Out" section after he saw a post on Twitter calling the list a great resource.

Robertson said he was disappointed to see his graphic novel series, "7 Generations," on the list.

"There’s a lot of Indigenous writers who are sharing their truths to own those stories about the difficult parts of our history that sometimes we don’t want to talk about, and these are the books we should be bringing into the classroom," he said. "I’ve done a lot of work over the last decade and spoken to tens of thousands in classrooms across Canada using my books.

"It’s pretty troubling to me to see that an entire public school system is not recommending some really valid, important texts — and not just mine, but from other writers as well."

Robertson’s four−book series, written for Grade 9 to 12 students, follows the story of an Aboriginal family from the early 19th century to the present day.

On the book review site, the series was not recommended for use in Edmonton public schools because it contains "sensitive subject matter and visual inferencing of abuse regarding residential schools."

The review added that the books "require pre− and post− conversations with students" about the legacy of residential schools.

"What is a school there for if they’re not going to have pre− and post−conversations about literature that begin in the classroom? That’s the whole point," said Robertson, who won a Governor General’s literary award for his book, "When We Were Alone," for younger students.

Officials from the Edmonton Public School Board said in an emailed statement late Monday that the site was created to support teachers in selecting resources that reflect diverse First Nations, Metis and Inuit culture as well as identifying literature that may inaccurately portray Indigenous peoples.

"Some books were highlighted for a number of reasons, including the ways in which they portrayed First Nations, Metis and Inuit peoples, imagery or language," said Carrie Rosa, spokesperson for Edmonton Public Schools.

"The intention was not to suggest these books be made unavailable, but to help educators make informed decisions around how they could use the resources."

Rosa said the language used for the title of the section did not reflect its intent.

"For this reason and the fact that the site is now several years out of date, we will be taking the site down for review," she said.

Students were asked: "A positive effect of residential schools was?" The four multiple choice options listed were: that children were away from home, they learned to read, they became civilized and they were taught manners.

The question prompted a complaint from a student taking the course from the St. Paul Alternative Education Centre.

Education Minister David Eggen apologized to the student, the student’s family and anyone else who had been exposed to the course.

The province ordered school divisions to thoroughly review all courses offered to ensure they don’t include insensitive material.