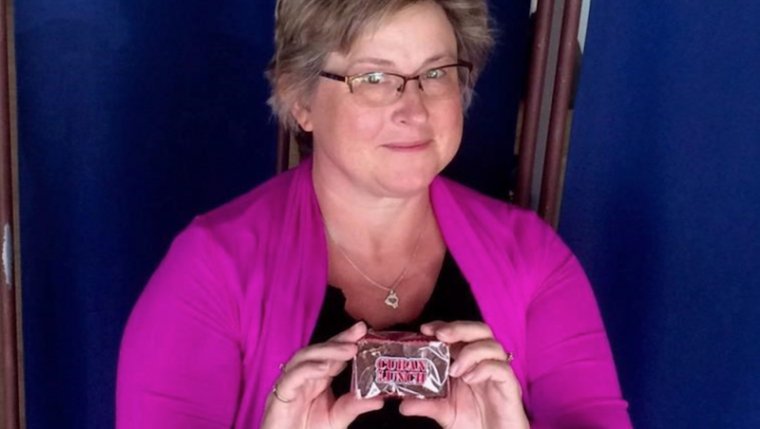 CAMROSE, Alta. — A peanut−and−chocolate candy popular decades ago has been flying off shelves since an Alberta couple revived it earlier this year.

The Cuban Lunch bar disappeared in 1991 when the Paulins factory in Winnipeg stopped making it.

And while its reboot has been a success, Crystal Regehr Westergard and her husband are facing some hiccups in resupplying stores clamouring for more.

For one, it took three months for a shipment of paper for the the red wrappers synonymous with the candy to finally arrive from overseas.

The pair churned out 60,000 bars in September from a factory in Delta, B.C.

"They just went whoosh out the doors of the stores," Regehr Westergard said recently. "We never imagined we’d catch on this fast."

The comeback venture started as a way to cheer up Regehr Westergard’s 85−year−old mother by bringing her favourite candy to her nursing home.

Regehr Westergard and her husband, Bert Westergard, then decided to go ahead and buy the trademark for not much at all.

While she doesn’t know the origins of the name, Regehr Westergard said it wouldn’t be Cuban Lunch without the original’s rectangular rippled cups. They were perfect for keeping melted chocolate contained on a hot day.

"You could eat it and you could still drive your tractor or drive your rig," Regehr Westergard said.

"It was packed with peanuts and calories and got you through and didn’t drip down your arm."

The first batch long gone, another 33,000 bars were made in October. Those were swiftly snapped up, too.

The first time, Regehr Westergard drove through an autumn blizzard to get boxes to stores in the Edmonton area. For the second batch, the couple had a distributor take care of it.

Finally, last week, more than 100,000 of the signature cups arrived at the factory. The correct paper had to travel from Japan with stops in Mexico and California.

"I think that’s why no one ever brought the Cuban Lunch bar back before, to tell you the honest truth." said Regehr Westergard. "No one makes those hyper−specialized little rectangular cups."

Many of the new cups had to be thrown out because they got too wet. The factory started pouring chocolate last week, but it’s not clear how many new bars it can make this time.

The couple has been selling bars through a program at grocery giant Sobeys Inc. aimed at highlighting regionally relevant products.

In Western Canada, where Cuban Lunch is best known, the bars are available at Sobeys, Safeway, IGA and Thrifty Foods stores.

Sobeys development manager Gary Hughes said Cuban Lunch was the top seller while it was in stock.

"That’s a short window of time because it’s here today and almost gone tomorrow," he said. "We’ve had customers coming in and buying them by the box in our stores."

Hughes said 180 of the 250 or so stores west of Winnipeg have signed for the next shipment. The company is working to make sure all outlets have some to sell, even though it may not be the full amount they requested.

Prof. Janis Thiessen, who studies 20th−century food history at the University of Winnipeg, was recently given a Cuban Lunch bar by her brother, who knew she would get a kick out of it.

She said it was tasty with big peanut chunks.

Thiessen said she can’t recall the original enough to know how the revival compares, but she understands why there has been such voracious demand.

"Food is never just about sustenance or about biological taste. Memory plays an important role there, so to have something like this come back, is meaningful for a number of people."

Regehr Westergard is hoping to find out in the new year if Cuban Lunch Co. will be accepted into a small business accelerator program in Calgary, which would help with sales, distribution and marketing.

The couple has bought trademarks for two other defunct candies — she won’t say which — but have been having trouble finding a factory to make them.

For now, she figures the chocolate business eats up a couple of hours each day.

She’s not quitting her day job as a physiotherapist and guffaws when asked if Cuban Lunch is making money.

"Oh goodness, no, not presently," she said. "Maybe some day."

— By Lauren Krugel in Calgary