Cops search for at Least One armed Suspect in St. Catherines 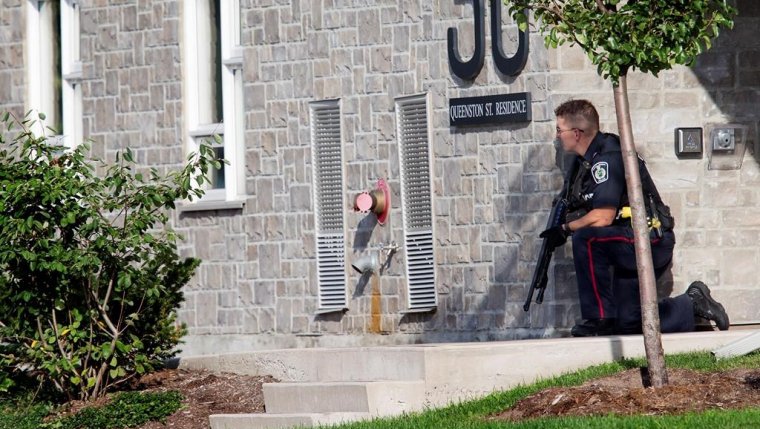 ST. CATHARINES, Ont. — Police searched for at least one armed suspect Thursday following a daytime shooting in St. Catharines, Ont., that sent three people to hospital, one of them in critical condition.

Niagara regional police said officers were looking at a number of residences in a downtown area of the city west of Toronto in what they described as a "slow, methodical process."

He said police do not know whether the shooting was targeted, nor did they have a description of the suspect or suspects.

"This is a very impactful situation on the city," Gavin said. "Multiple shooting of three people in the city is not something that happens, thankfully, very often."

Those injured in the shooting have not been publicly identified, but authorities said one was flown to a trauma centre, another was taken to a local hospital in critical condition while a third had what appeared to be non−life threatening injuries.

He said numerous officers, the K−9 unit and emergency responders were all on the scene.

Police advised residents to stay out of the area, and employees of local businesses said they remained inside with doors locked until more information was available.

St. Catharines Coun. Mat Siscoe, who represents part of the area where the shooting took place, said the neighbourhood has struggled economically in recent years.

"The main hospital used to be just down the street from there, and it’s been a fairly economically depressed area since the hospital closed down about four years ago," he said.

But he stressed violence on this scale is very unusual both for the neighbourhood and the city.

"It’s unusual for the city of St. Catharines in general," he said. "We’re not used to gun violence in the city. Not on this scale."