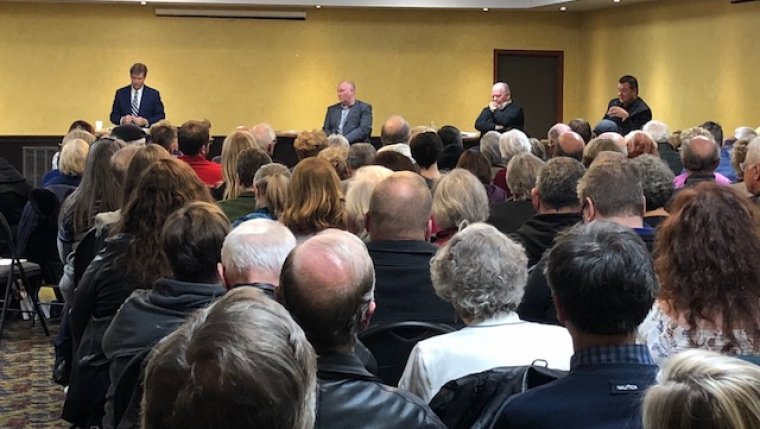 WINNIPEG - Four candidates were under the microscope at an election forum Wednesday night that was a good example of what can happen, when residents care about their community and expect their vote to be earned. In this case, well over 225 votes, as every seat put out at the Park West Hotel was filled. Among the standing room watchers was area MLA Myrna Driedger and Waverly West councillor-in-waiting Janice Lukes, while firefighter union president Alex Forrest watched from the front row.

Held in Charleswood, the ward also encompasses Tuxedo to the east and Westwood to the north across the Assiniboine River. The candidates all tried to ensure that the entire ward was discussed as moderator Geoff Currier lobbed the occasional curveball into the mix of pre-discussed topics.

Generally speaking the field is split with 2 on the political right and 2 on the left. Former council member Grant Nordman, a self-described card-carrying Conservative, sounded like his usual old self, "tickled pink" to be there, "not in a hurry to build new cycling opportunities", putting the brakes on further BRT spending beyond that already committed (while admitting he voted to build Phase 1). His observation that a councillor can't think they are "going to city hall to be the new sheriff and clean up Dodge" pretty much told voters he was not interested in confronting bungling administrators.

Nordman did fire off the funniest line of the night when Currier asked the council candidates which mayoral candidate they most align with - "I've been going back and forth between Ackerman and Woodstock."

However, Kevin Klein challenged Nordman from a more mid-right platform, comparing his uncritical remarks to the audience about Mayor Brian Bowman, last week when the former Council speaker and EPC member told CBC that Bowman was a "3 dressed up as a 9" and had won election in 2014 without being truly qualified to be Mayor.

Klein scored the biggest surprise of the evening when he pronounced he was actually supporting Bowman, after a campaign built largely on criticizing his term in office for lacking bottom-line common sense, attempting to ram a freeway through the South Wilkes neighbourhood, and the Mayor's Impact fees on new homes (with generally younger buyers) meaning the "$10,000 on a mortgage becomes $40,000" in the long term.

While explaining that he felt Bowman was able to better handle a second term after 4 years of seasoning, "collaboration ... does not mean we can't challenge the status quo ... we won't agree on everything." Klein, who wields experience as publisher and CEO of the Winnipeg Sun and on an Ontario police board, stood firm on the need for improved fiscal management focusing on crime, roads and sidewalks, community centres and the need for due diligence at city hall.

The hopefuls on the left had a smattering of support in the crowd and raised a few eyebrows with some statements. Kevin Nichols, a 32 year civic employee, claimed he could guarantee to cut $8 million in expenses from the city budget, but was prohibited from providing details because of his employment. He suggested bus fares should be dropped to $2 to stimulate ridership, and claimed that crime could be reduced by ensuring the city had a minimum wage of $15 per hour, with employer costs offset by tax reductions. That concept garnered a few heads shaking.

The other portside candidate, Ken St. George, referenced his being a nurse in the community but did not explain he is an LPN, and not an RN, nor did he identify an employer. Although his online material has trumpeted him being a CEO of the "Albert House Foundation" working with an established agency in planning about core area homelessness and drug treatment, he made no mention of leading any foundation at all. I had completed a search of provincial and federal records last week which did not return any registration results for an "Albert House". Clearly this is an unresolved question and maybe he didn’t talk about it so he could avoid a challenge from his fellow candidates or the moderator.

His social-work style emphasis on the issue would play far better in an inner-city contest than in these suburbs. St. George did demonstrate an understanding of problems with transit services such as staff and fleet shortages, as his father is a very long-term driver he claims. Like the other 3, he made good points about solutions for heavy traffic that need to be decided for the ward while preserving neighbourhoods and the Harte Trail.

The St. George concept of charging a "Port of Entry" fee on weekdays to commuters from outlying communities like Niverville and Stonewall by plate scanning ("$180,000 a day") got zero traction in the room.

When asked by Currier, none of them had any confidence in the current transit service or its spending. The continuing failures of the Peggo bus pass technology didn't earn a mention - which shows how far under the radar the fiasco endured by regular bus riders is.

The audience was very polite and no partisan hectoring or antagonism was noted. A predominantly older bunch, they well understand the quality of life issues that are creeping into the ward; the effects of the city discontinuing affordable leases is affecting over 55 recreation and social activities, and property crimes have skyrocketed. This was a knowledgable group of voters and although clearly leaning right in the discussions afterwards, there was less ideology bandied about than in other wards.

My sense is that the polarization between left and right in other city races, simply would not earn any points from this bunch. They just want a councillor who watches their wallets and makes sure they get what they pay for. Currier was excellent in handling the evening, and the organizers should be quizzed by civic activists of all stripes how they drew such a robust crowd. In my opinion, every ward needs forums run like this, to evaluate the issues and compare the candidates in person.