Boozing Before Game Leads to Ejection From Curling Event 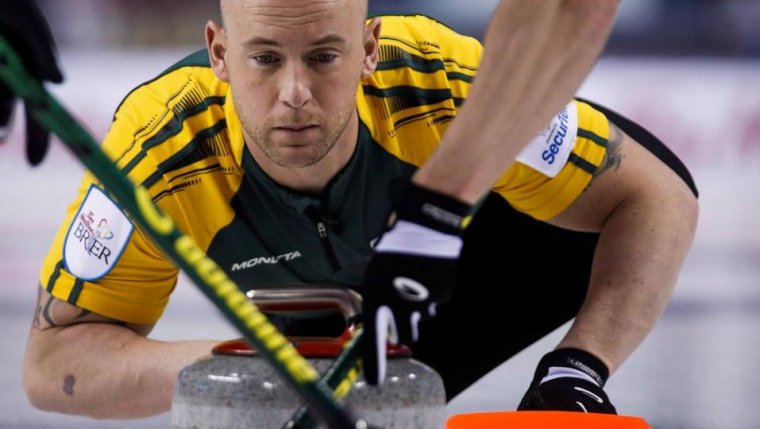 A curling team skipped by Jamie Koe that featured 2014 Olympic champion Ryan Fry was ejected from an Alberta bonspiel over the weekend for what organizers called unsportsmanlike behaviour resulting from excessive drinking.

The team was tossed from the Red Deer Curling Classic on Saturday night. The move was announced via Twitter on Sunday by the World Curling Tour, which oversees the $35,000 event.

"They were upstairs in our lounge beforehand and everything kind of seemed normal I guess," Red Deer Curling Centre manager Wade Thurber said Monday. "Our bar staff eventually cut them off and then it was time for them to go curl.

"That was probably the unfortunate thing was they had to go curl."

Fry, who won Olympic gold at the 2014 Winter Games, normally plays third for Team Brad Jacobs. He was filling in as a substitute on a Koe team that included Chris Schille and DJ Kidby.

Koe, who has represented the Northwest Territories at several national championships, tried a practice slide before Saturday’s game but it did not go well and he decided to sit out.

"He was too drunk to play," Thurber said from Red Deer. "They played three−handed."

Thurber said Kidby and Schille did their best to get Fry to focus on the game, but were unsuccessful.

"On the ice, he broke three brooms, Thurber said. "There was of course foul language, and a little bit of disruption with the sheets beside them."

"The other guys were trying to control Ryan and they couldn’t," he added. "He just got past that point of being able to tell him anything. There was some damage in the locker room and some broombags kicked around. It was just conduct that was unacceptable."

The opposing team, skipped by Kody Hartung, went on to post a 10−5 victory. The teams shook hands after seven ends.

"I would like to sincerely apologize to the fans, participants and organizers of the Red Deer Curling Classic," Fry said in a statement issued by Curling Canada on Monday. "I came to the event to play and enjoy the sport, but a bad lapse in judgement affected the experience for others. My actions were truly disrespectful and embarrassing — the committee was right to disqualify us from play.

"I allowed myself to lose control — I offended people with my actions and I wish nothing more than to apologize to everyone individually. I will be taking proper steps to ensure this problem can never happen again. I will continue to strive to become a better version of myself while contributing positively to the sport and curling community that I love so much."

Team Koe’s last game on Sunday was declared a forfeit.

"Due to lapse in judgment on Saturday, we contributed to (an) unpleasant experience for others," Koe said Monday in a statement. "Although I removed myself from the last game before it started, the actions from the team led to our disqualification. We were disrespectful and the committee was right to disqualify us from further play, which we did not argue.

"I would like to sincerely apologize to the athletes, fans and organizers at the event. I will be taking steps to ensure this never happens again."

The competition was set to wrap later Monday. The event committee had yet to decide on the team’s future participation in the event and the WCT has asked for a full report.

"I’ve seen brooms broken before, we’ve seen smash marks in the ice, guys get a little heated out there at times," Thurber said. "But it’s usually a quick one−minute incident and it’s done. This was kind of the whole game."

Fry normally plays on a team with Jacobs, E.J. Harnden and Ryan Harnden. In addition to their Olympic title, they won the Tim Hortons Brier in 2013 and won silver at the world championship that year.

"We’re all very disappointed," Jacobs said from Sault Ste. Marie, Ont. "We in no way support that type of behaviour, whether it’s displayed on or off the ice. It’s absolutely unacceptable. We’ve shared that with Ryan. Really at this point, we’re just taking the necessary steps to handle it internally and that’s really where we’re at. So nothing more to add."

"We are handling it as a team," Jacobs said. "We do need to have further discussions about this. Our plan is to move forward with Ryan and hopefully resolve this as quickly as possible and not have it affect our play on the ice."

Thurber said Fry and other members of the Koe team have since reached out to the Red Deer club and were very apologetic.

"He’s offered to pay for damages," he said of Fry. "He’s been very courteous, I guess we’ll say. Hasn’t been a problem at all, was just regretting his actions on Saturday."

Fry did not immediately return a text message. Curling Canada said his statement would be his only comment on the matter.

"We’ve had this spiel for maybe 20 years," Thurber said. "This is the first time we’ve had to kick someone out. It’s hopefully just one isolated incident and hopefully everybody learns going forward from it."