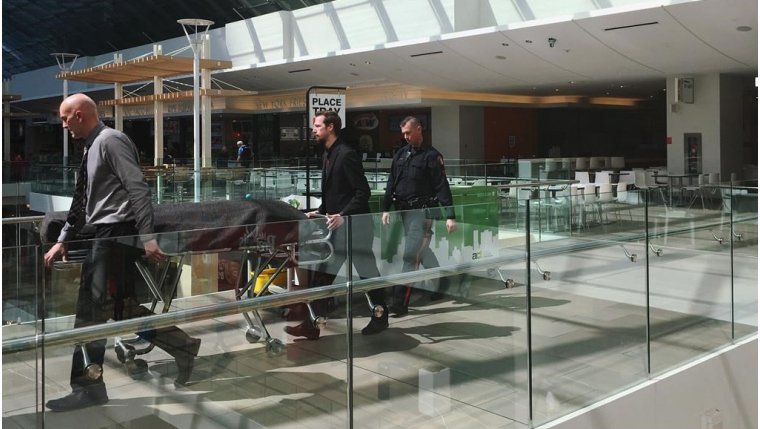 CALGARY — A man’s body was extracted from inside a wall of a women’s washroom in a busy downtown Calgary mall on Monday, but police said they did not suspect foul play.

The discovery was made about 9:30 a.m. by a maintenance worker who was called in to fix a toilet that wouldn’t flush on the fourth floor of The Core Shopping Centre, said police spokeswoman Emma Poole.

"If you were to look at the toilet, there’s a panel behind it, so that when people move, it would automatically flush," she said. "When they removed that panel, they found a deceased person behind that wall."

During the busy lunch hour, people dined metres away from the washroom, which had a yellow caution ribbon strung across the entrance. A security guard directed women to another washroom a floor below, but the men’s and family washrooms were still accessible.

Officers could be seen ducking in and out of the washroom, along with officials from the medical examiner’s office. Several firefighters were there to help remove the body.

In the early afternoon, a section of the food court closest to the washroom was cordoned off entirely and media were asked to move back. At around 3 p.m., the body, shrouded in a black blanket, was wheeled out.

"Despite the circumstances of where the body was located, investigators do not suspect foul play and the death remains classified as undetermined," police said in a news release.

The man’s identity has not been determined. Police said they are still investigating when he died and how he ended up inside the wall.

Poole said earlier that it’s possible someone crawling through a vent or duct fell from above and got stuck.

"That would be the most logical ... that it was from above," said Poole. "That is obviously something they would be looking at is someone crawling through the ventilation system."

— With files from Chris Purdy in Edmonton