Zamboni Misplaced by Storm Takes Off on Social Media 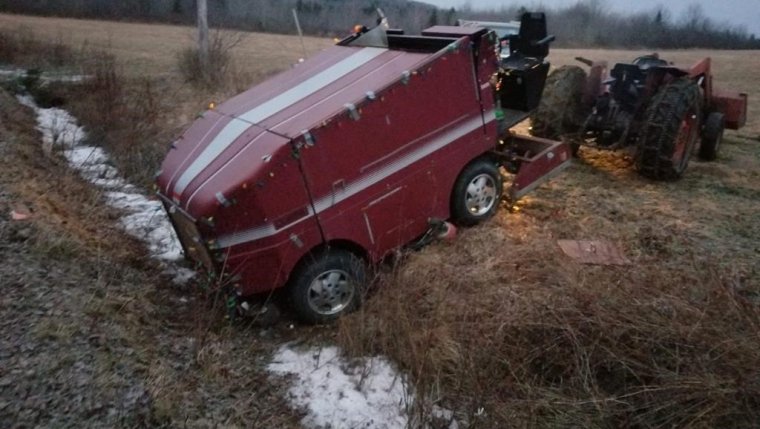 WINDSOR, N.S. — The powerful storm that battered Eastern Canada Monday had an unexpected casualty −− a Zamboni found in a ditch near Windsor, Nova Scotia, without a rink in sight.

A bemused driver snapped a photo of the scene and it quickly spread on social media as a bizarre rural Canadian tableau.

Jake Ross, who had bought the Zamboni at auction as a novelty, put it out on his lawn decorated with Christmas lights for the holidays.

The strong winds that ripped shingles off his roof apparently also pushed his large lawn decoration off for a spin across the property.

"The wind got it rocking and rolling and it just took off in the night," Ross said on Tuesday.

The sight took him by the surprise when he was leaving for work on Monday.

"I just kinda glanced at the side and saw it sitting in the ditch and thought, no way. It was a couple hundred feet down the road," Ross said.

He was crunched for time, so he had to leave it and hope it wouldn’t be towed before he got home in the evening.

"I was running late Monday morning, and I was like, ’I don’t got time to deal with this.’ So I had to leave it," he said.

In the meantime the photos spread on Facebook, even catching the attention of comedian Larry the Cable Guy.

The American comedian shared the photo with the caption: "You guys in Canada sure know how to party."

Ross said he found the incident and subsequent social media buzz funny, and he managed to tow the vehicle out of the ditch with his truck that evening.

The Zamboni is now stored out back with its parking brake on.