What Was Seen & Heard at Fredericton Shooting 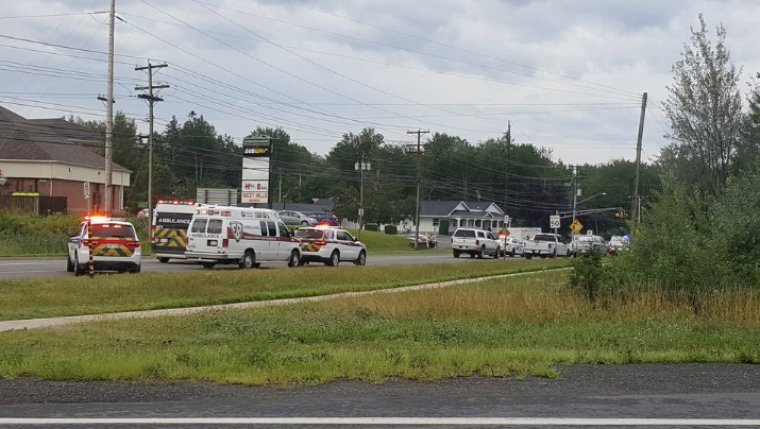 Residents of a tranquil Fredericton neighbourhood watched and waited for nearly three anxious hours early Friday as authorities tracked down a suspect who allegedly opened fire and killed four people, two of them police officers.

For some, the terror began from the moment they opened their eyes. For others, it didn’t sink in until they learned they were forced to hide in their homes. Here is how the morning unfolded from their perspectives.

David MacCoubrey was asleep in his apartment on Brookside Drive when three shots echoed through the morning calm mere metres from his bed.

"It sounded like the first one came from right outside my bedroom window ... I was hoping for the two seconds that I was groggy that it was kids blowing off firecrackers,’’ he said. "Then two more happened within the first three minutes.’’

MacCoubrey said he heard at least 17 more shots over the next hour and a half, which he spent sitting on the floor far from his apartment windows.

Tim Morehouse said he heard the trouble before he saw it.

In his apartment on 237 Brookside Dr., he said he heard someone yelling "shut up! Shut up!" Then the bullets began to fly, first in a volley of two, then another of three.

When he looked out his apartment window, he said he saw the body of a man lying in the back parking lot of his building. He called 911, heard more shots and took another glance out the window.

"I hear more shots and looked out and there’s two police officers on the ground," he said.

As police went around the neighbourhood, Louise Kennedy was advised to vacate her apartment at 237 Brookside. But the 75−year−old woman said she couldn’t flee to safety while her pet remained in potential danger.

"I couldn’t leave my dog behind," Kennedy said, sitting and trembling in her apartment. "The police officer told me to stay away from the windows and to lock the doors.’’

Looking after her dog did not dispel her own fear, however.

Travis Hrubeniuk’s fiancee had just left for work around 7:45 a.m. when he began hearing a steady stream of sirens passing his home. Aware that his typically quiet neighbourhood was under lockdown, the 27−year−old Winnipeg native spent the time combing social media for updates on the evolving situation.

The area he’s called home for a year, which features houses, a school and other hallmarks of a peaceful residential community, is the last place Hrubeniuk said he expected to encounter a dangerous situation.

"This is the first time I’ve even heard of any serious crime or violent crime in this city," he said. "It’s a little off−putting that way."

Business owners and their employees also found themselves at loose ends while police blanketed the area. Funeral Director Bill Henwood was among a crowd of bystanders barred from going to offices located behind the area investigators had cordoned off.

People sat in their cars or stood near the blockade of police and fire vehicles "hanging tight and waiting for word" on what comes next, he said.

One local daycare took the precaution of relocating children to another facility slightly further away from the scene of the shootings. While staff said they kept the doors locked, the kids carried on with normal life, playing with toys or watching a movie as the police investigation unfolded.

Annick Meilleur, 50, watched in shock as buses that usually travel along busy main routes began diverting down her side street near the shooting scene.

Shock gave way to relief when, at 9:45 a.m., police announced they had a suspect in custody. Meilleur suspects that relief will last and restore the sense of safety and calm she’s come to expect of the area.

"I feel like looking over my shoulder or looking at people differently, but I think that will subside," she said. "Being on lockdown was very bizarre because I leave my door unlocked most of the time. There’s nothing to fear."

As police announced that a suspect was in custody, displaced residents began trickling into Scott Macleod’s funeral home, some with their pets in tow.

Macleod said some came to the building in search of other family members.

"Everyone is puzzled, everyone is confused," he said. "They are wondering what the next steps are."

— with files from Gabriele Roy in Toronto, and Keith Doucette and Aly Thomson in Halifax.