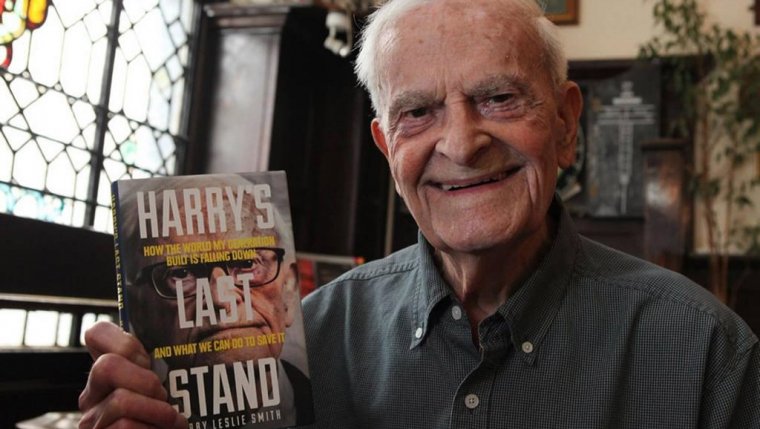 Legions of social media users are holding virtual vigil for Harry Leslie Smith, a veteran who channels his experiences with poverty and persecution into a call for justice echoing across generations, as the 95−year−old battles critical illness in an eastern Ontario hospital.

Online tributes have been pouring in for Smith, a survivor of the Great Depression and veteran of the Second World War, as he receives treatment in an intensive care unit in Belleville after a fall, according to his family.

Smith’s son, who has been issuing regular medical updates to the famed activist’s nearly quarter−million Twitter followers, posted Thursday that doctors said his father is "very sick" but they are beginning to "right the ship."

But even as a tube pumps oxygen into his lungs to fight off pneumonia, Smith’s concerns still lie with the disenfranchised, whispering "solidarity" with the thousands of migrants from Central America heading toward the U.S.−Mexico border, his son said.

"I am the world’s oldest rebel," Smith told UNHCR Magazine in October. "I think there are many things we can do if we put our minds to it, and we shouldn’t be leaving anyone out."

Smith, who splits his time living between England and Canada, rose to online prominence as a nonagenarian for his progressive polemics rooted in personal strife. Having witnessed the perils of financial collapse, social unrest and global conflict, he earned a reputation as a prophet of the cyclical nature of the calamities of civilization.

Born in Yorkshire, England, Smith’s four−year−old sister died of tuberculosis in 1926, his family too poor to afford proper medical care before the formation of the National Health Service.

When the Great Depression took hold, Smith learned the price of survival, his youth punctuated by hunger and homelessness as the working class bore the brunt of corporate excess.

In his teens, he and his friends would laugh at news footage of Adolf Hitler, but it wasn’t long before he was sent to fight fascism as a member of the British air force.

In several books and essays, Smith draws parallels between his own brushes with global crises of the past and current turmoil that affects the marginalized. He is particularly critical of the dismantling of social−welfare systems, the inequities of unchecked capitalism and the rising threat of nationalism.

Smith told UNHCR he is troubled by the "fear−mongering" rhetoric about refugees, whose plight reminds him of the suffering he witnessed during the Second World War.

"I can still see them," he said, his mouth quivering as he stammered out the words. "Absolutely pitiful, hungry, starving. When it was possible, we would stop and give them whatever excess food supplies we had on our trucks and reassure them that now they were safe."

Last year, Smith launched a crowdfunding campaign raising more than $70,000 for his "Harry’s Last Stand Tour," dedicating his remaining years to touring refugee hotspots to shine a spotlight on the crisis.

As Smith took to online modes of communication like social media and podcasting, his message has found particular resonance among millennials, a cross−generational kinship of feeling like one has come of age at a nadir in history.

But Smith is determined to make sure that his past is not the next generation’s future. Despite the deja vu of human tragedy, an unwavering optimism shines through his rousing calls to action.

"We have to live together," he told UNHCR. "It’s our only hope of survival."