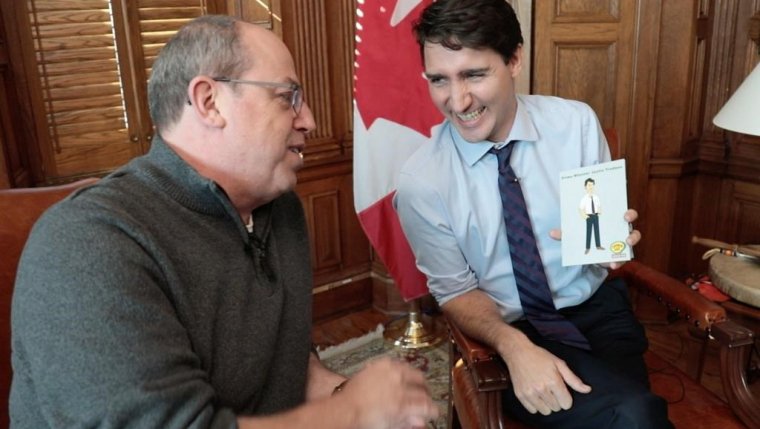 OTTAWA — Justin Trudeau will follow in the footsteps of two previous prime ministers by appearing in an episode of "Corner Gas."

The show’s Facebook page said on Saturday that Trudeau will play himself on an episode of "Corner Gas Animated" when its second season debuts this spring on The Comedy Network.

A photograph accompanies the post, showing Trudeau in his Parliament Hill office with sound technicians and "Corner Gas" star and creator Brent Butt.

Former prime ministers Paul Martin and Stephen Harper also made brief appearances on the live−action version of "Corner Gas," which ran for six seasons between 2004 and 2009.

Set in the fictional Saskatchewan town of Dog River, "Corner Gas" was the No. 1 sitcom in Canada throughout its entire run.

Trudeau tweeted about his cameo on Saturday.

"Home after a great couple of days in Saskatchewan. But I’ll be at @cornergas in Dog River very soon. Stay tuned," Trudeau wrote, referring to his trip to the province last week where he announced a deal for closing coal−fired power plants as well as funding for a geothermal generating facility.

Trudeau previously appeared on the small screen in the 2007 CBC docudrama "The Great War." He depicted Talbot Mercer Papineau, a soldier who died during the Battle of Passchendaele.

Butt, meanwhile, thanked Trudeau for continuing the tradition of doing a cameo in a version of the show, noting it was always fun.

"This is a quick, but very funny scene. We were in and out of his office in about 15 minutes!" Butt wrote in his tweet that accompanied the photograph taken in Trudeau’s office.

A news release from Bell Media, the parent company of The Comedy Network, said Sunday that the upcoming 11−show season will also include cameos by astronaut Chris Hadfield, Harley Morenstein of the YouTube cooking show "Epic Meal Time," and actor Michael J. Fox.

The second season also features Canadian comedian Russell Peters, who the release said plays both a forest ranger and a bear in the same episode.

As well, Arden returns to the franchise for a second time, guest starring as a university representative who finds herself in Dog River to personally deliver a Doctorate of Philosophy to one of the residents.