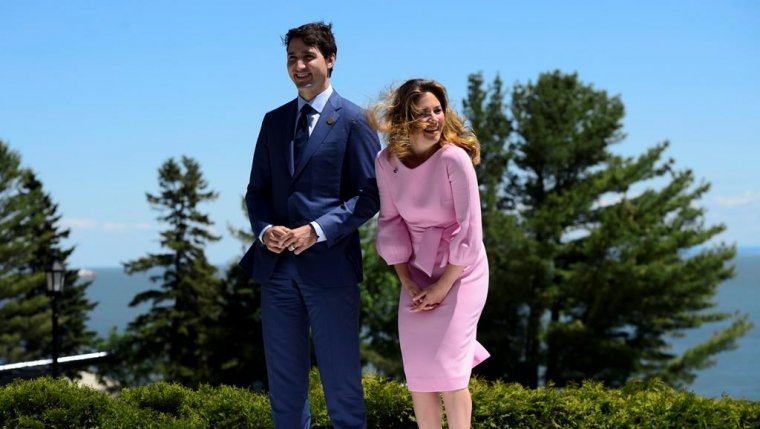 QUEBEC — The Trudeau government is planning to announce a $400−million investment on Saturday at the G7 summit to help send the world’s poorest girls to school, The Canadian Press has learned.

The funds are part of the government’s signature response to a campaign by a coalition of 30 non−governmental organizations that pressed Prime Minister Justin Trudeau to persuade his fellow G7 leaders to commit US$1.3 billion over three years to help send millions of girls to school.

The announcement will likely help Trudeau counter the disruptive influence of U.S. President Donald Trump at the summit, who faces a showdown with fellow leaders on a range of issues, from trade, to tariffs to climate change to America’s withdrawal from the Paris climate change treaty and the Iran nuclear deal.

Trump shocked the summit Friday by calling for Russia to be allowed to return to the G7 after it was kicked out in 2014 for invading Ukraine and annexing Crimea.

The G7 countries are more harmonious on the need to boost education for girls in impoverished countries.

Multiple sources familiar with the government’s plans confirmed the amount of the Canadian contribution, and some of them said they were expecting contributions from other countries, including from outside the G7.

The sources spoke on the condition of anonymity because they were not supposed to discuss the government’s plans in advance.

The Canadian contribution falls short of the C$500 million that the coalition was seeking from the government.

It also was not clear whether Saturday’s announcement would be new spending or money redirected from existing government coffers.

The coalition — which includes groups such as Plan Canada, the United Nations Children’s Fund and World Vision Canada — insisted that any Canadian contribution had to be new money for it to be meaningful.

The heads of major aid agencies said Trudeau must have a plan with money attached because vague G7 declarations of intent simply won’t be enough to back his pro−feminist aspirations and rhetoric.

One of Trudeau’s cross−cutting themes for Canada’s G7 chairmanship was gender equality and empowering women and girls. Trudeau planned to meet Saturday morning with his Gender Equality Advisory Council ahead of the expected announcement.

The project has echoes of the marquee development project that Canada unveiled the last time it hosted the summit of the world’s leading industrialized nations in 2010. At that time, it was the G8, which included Russia.

There is at least one major difference between the maternal, newborn child health initiative of the then−Conservative government of Stephen Harper and the current Liberal one.

Harper got to work on his initiative more than six months ahead of the June 2010 Muskoka summit, while Trudeau began to push for the funds in the last two months.

The coalition presented its girls’ education proposal to Trudeau in April.

They gave the Prime Minister’s Office an analysis that showed the spending commitment would help 3.7 million children in poor countries — mostly girls — get access to education.

The group then went public in late April, urging Trudeau to make girls’ education a highlight at the G7 summit. The prime minister has been working on it ever since, sources said.

They coalition has been hopeful Trudeau would listen to them because of a key sentence in a statement he released in April on gender equality.

"Investing in girls’ education, especially in crisis situations, is a vital part of making that a reality," Trudeau said at the time.