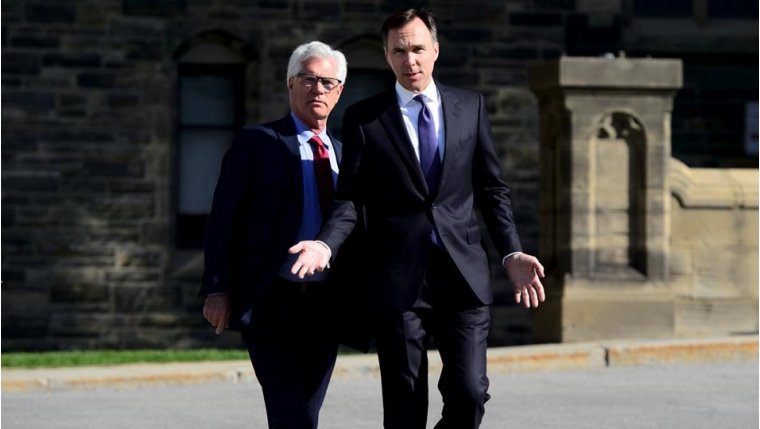 OTTAWA — The federal Liberal government plans to spend $4.5 billion to buy the Trans Mountain pipeline and all of Kinder Morgan Canada’s core assets.

Finance Minister Bill Morneau says that in return, Kinder Morgan will go ahead with its original plan to twin the pipeline this summer while the sale is finalized, which likely won’t happen until August.

Once the sale is complete, Canada will continue the construction on its own, with a view to eventually selling the whole thing down the road, once market conditions would allow it to get the best price.

Morneau presented the options during an early−morning cabinet meeting today before ministers made a decision on how to proceed.

Export Development Canada will finance the purchase, which includes the pipeline, pumping stations and rights of way along the route between Edmonton and Vancouver, as well as the marine terminal in Burnaby, B.C., where oil is loaded onto tankers for export.

Morneau says the federal government does not plan to be a long−term owner and is in negotiations with interested investors, including Indigenous communities, pension funds and the Alberta government.

Alberta has also agreed to provide funding for any unexpected costs that arise during construction.

The plan — similar to how Canada financed and managed shares in General Motors and Chrysler in 2009 during the financial crisis — will include a new Crown corporation to manage the project.

The deal brings some certainty to an expansion project that has been on the rocks ever since B.C. went to court in hopes of blocking it, fearing the impact of a spill of diluted bitumen, the raw output from Alberta’s oilsands.

Ottawa has the constitutional authority to build interprovincial projects like pipelines, but B.C. Premier John Horgan has gone to court to get a judge to weigh in on whether B.C.’s jurisdiction for the environment would allow him to regulate what flows through the pipeline.

The ensuing uncertainty, paired with vociferous opposition from environmental groups and some Indigenous communities in B.C., prompted Kinder Morgan to halt investment until the federal government could inject some certainty into the project.

Ottawa is pressing ahead, firmly of the opinion there is no doubt about its jurisdiction. It is also confident it will prevail in a Federal Court challenge by some Indigenous communities over its approval of the pipeline, a ruling on which is due any day.

A Finance Department official says that as a Crown project in the national interest, Canada has special allowances to proceed that may not be available to a private−sector company.

Canada approved the project in November 2016, following an expanded environmental review process that included additional consultations with Indigenous communities and assessing the amount of additional emissions likely to result from additional production.

Prime Minister Justin Trudeau has long insisted the project is in Canada’s national interest and is a pivotal part of the country’s economic future.

Canada loses $15 billion every year on the sale of oil because the U.S. remains its only export customer, resulting in a lower price, Trudeau argues. A lack of capacity in pipelines or in rail cars to ship oil produced in Alberta is also hurting Canada’s energy sector.