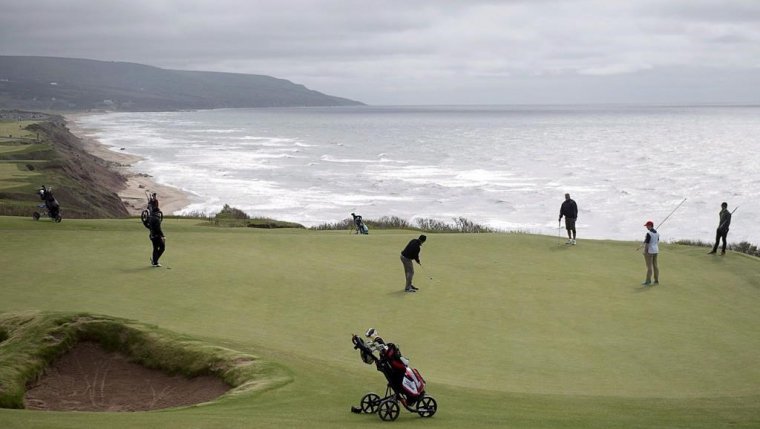 The latest loan will help the picturesque Inverness resort broaden its appeal for families, non−golfers and corporate groups, the agency said.

It’s also part of an effort to attract more visitors to the remote resort and bolster tourism in the province, it said.

"The expansion will strengthen Cabot’s international reputation as a luxury golf destination, bringing more visitors to Cape Breton," the federal agency said in a news release.

In all, Cabot Links has received $8.5 million in interest−free loans from Ottawa, while the Nova Scotia government has contributed an $8.25 million low−interest loan.

A spokeswoman for Nova Scotia Business Inc. said Cabot Links "is in compliance with its terms and conditions" of the provincial loan, but did not say how much remains outstanding.

ACOA recently said Cabot Links is on track to repay its loans.

The financial support has sparked a polarizing economic development debate. Critics have said most of the jobs are seasonal, and question using public dollars to bankroll a private business catering to affluent golfers.

ACOA said the new funding will create an additional 50 full−time positions, on top of the nearly 300 people currently working at the golf courses.

Ben Cowan−Dewar, co−owner of Cabot Links, said the next phase of development "represents a major growth opportunity for our resort."

"Not only will this phase have a positive impact on our guests and their overall experience, but also, our surrounding community by way of creating more job opportunities in the area," he said in a statement Friday.

Critics from around North America have been agog since the Cape Breton golf courses opened, starting with Cabot Links in 2011 and Cabot Cliffs five years later.

Inspired by venerable Scottish links, the courses of manicured turf, woven through dunes land, are located along the coast of the Gulf of St. Lawrence.

In January, Cabot Cliffs was listed as No. 9 in Golf Digest’s World’s 100 Greatest Golf Courses list, and Cabot Links was ranked No. 43.

"We will continue to make smart, strategic investments to ensure Canada’s tourism industry is truly world−class."

Meanwhile, the golf resort has been entangled in a court action involving a local activist seeking an injunction to block the development of high−end cottages in Inverness.

Neal Livingston has said the property, owned by Cabot Links, has been historically used by the community and should be "dedicated for public use."

− By Brett Bundale in Halifax