Toronto Storm Far Too Much for Eaton Centre 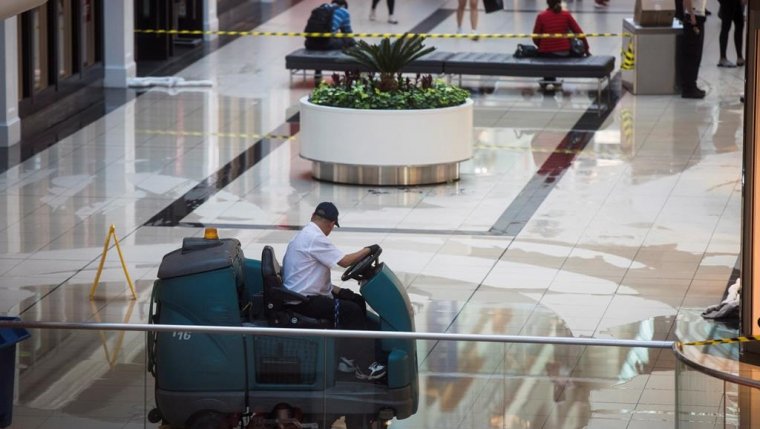 TORONTO — Even the iconic Eaton Centre mall wasn’t a refuge from the rain as a storm rolled through downtown Toronto on Wednesday afternoon.

Numerous people posted videos on Twitter as water poured from the ceiling of the shopping centre.

After the afternoon storm it looks like the #Toronto Eaton Centre sprung a leak - Video by @turcottespencer https://t.co/6nxxZFhOI7 pic.twitter.com/XaeDYsCEci
— blogTO (@blogTO) June 13, 2018

One person tweeted "It’s raining inside Eaton Centre," and video showed pools of water on the floors and a woman continuing to shop as water poured from the ceiling of a store.

Security guards were putting down barriers to keep the water from flowing into other shops.

A spokeswoman for mall operator Cadillac Fairview says a water leak, believed to have been caused by the rain, started on the third level of the shopping centre at about 4:30 p.m. and flowed down to the lower levels.

Michele Enhaynes says the source of the leak has been found and part of the mall is closed off, affecting some stores.

"The shopping mall is operational but there a few retail clients closed for the evening including Ted Baker, Guess, Marciano and Massimo Dutti," Enhaynes said in an email.

The areas affected by the flood were closed "in order to ensure the safety of our tenants, guests and staff," she said.

Much of southern Ontario was under severe thunderstorm watches and warnings on Wednesday afternoon and electrical utility Hydro One said about 47,000 customers were without power, many due to storm−related outages.