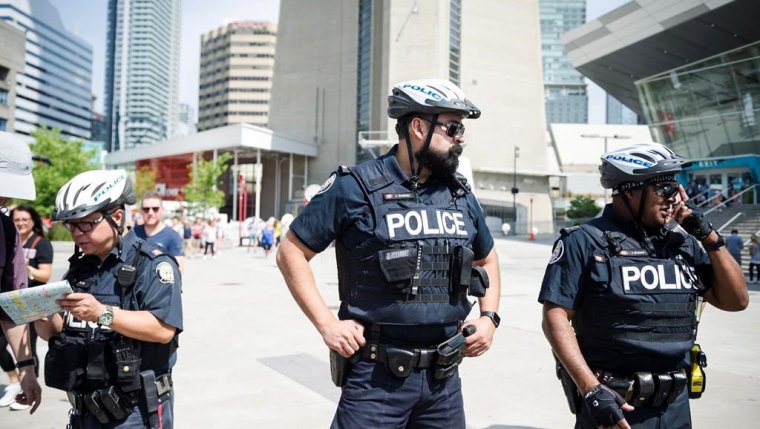 TORONTO — Information about a "potential risk" in the Greater Toronto Area led to an increase in police presence in Toronto’s downtown core on Thursday, but officers insisted the public should not avoid any of the city’s attractions, prompting confusion among some and anxiety in others.

Police would not specify what information they had received, or what their officers were looking for, but said the situation and their response were relatively common occurrences.

"The police presence in this area is simply to ensure that the public can enjoy and come down to this area unimpeded and without any worry."

Multiple media outlets reported Thursday that they had obtained an internal Toronto police memo that stated officers had received "credible information regarding a potential vehicle ramming attack in the area of the CN Tower." Toronto police declined to comment on the contents of that memo, but said it was a "draft operational plan" that was never approved.

"Our officers were provided with the most up−to−date and accurate information this morning, so was the public," police spokeswoman Meaghan Gray said. "Our current policing response in the downtown core is appropriate based on the information we have."

Police had tweeted at 9:30 a.m. that an "unconfirmed, uncorroborated piece of information" about the GTA had led them to boost the number of officers downtown.

Shortly after, Ontario Premier Doug Ford’s office said it was aware of the "unsubstantiated" report of a potential threat in Toronto, and Public Safety Minister Ralph Goodale tweeted that federal agencies were aware of the situation and ready to help if necessary.

The police tweet sparked anxiety and confusion in several Torontonians.

"I think it’s kind scary because you know there’s a threat but you don’t know what it is," said Nida Rafiq, who works across from Union Station, adding that she felt "paranoid" because police provided so little information.

Others took to social media to express their nervousness.

"The police aren’t saying anything and scaring… us," one person tweeted.

Barsky, who spoke at a press conference about two hours after the police tweet, said he "appreciated" comments about the message being vague.

"If we had more specifics or we could provide more specifics we would certainly be forthwith with that," he said. "I can’t speculate on how people are going to interpret our message."

At midday, families, tour groups and vendors bustled around the base of the CN Tower. Several passersby said they had not heard anything about the increased police presence. A handful of Emergency Task Force personnel patrolled a nearby, as cruisers parked at multiple intersections.

Despite the confusion surrounding police activity, Kevin Manol, 43, said he was not worried.

"It’s just another day in Toronto," he said, as he stood down the street from the CN Tower.

North of the city, there was also a heavy police presence at Canada’s Wonderland and other parts of York Region, in what officers referred to as a precautionary measure.

"We are working closely with our emergency service partners across the GTA as we investigate and respond to the information we have received," Const. Laura Nicolle said. "We encourage the public to be vigilant and report any suspicious activity to police."

Thursday’s events came just over two months after a van mounted a sidewalk in north Toronto and plowed into pedestrians in its path, killing 10 and injuring 16. Alek Minassian, was charged with 10 counts of first−degree murder and 16 counts of attempted murder. His case remains before the courts, with the next date set for September.

— with files from Alanna Rizza.