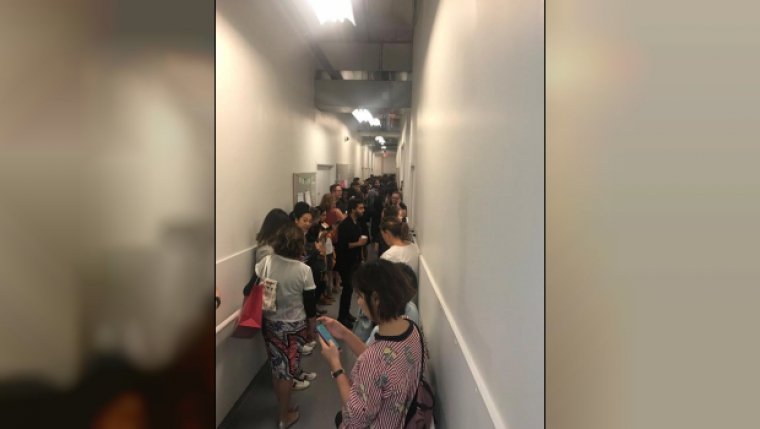 TORONTO — A shooting at a major Toronto mall on Thursday afternoon sent shoppers running for cover as police searched for multiple suspects.

No one was injured in the gunfire that police said took place on the east side of the Yorkdale Shopping Centre just before 3 p.m.

"Officers received a call for sound of gunshots and they confirmed it was discharge of a firearm and the mall was evacuated," said Const. Caroline de Kloet. "Nobody is being let in or out at this time."

Police said two of the suspects were men in their 20s and one was believed to have a black handgun.

Crowds of shoppers gathered outside the mall as police cars, fire trucks and ambulances were seen in the parking lot.

Donald Mudavanhu said he was walking through the mall on the ground floor when he heard loud bangs.

"We thought something fell, and then we heard it again a second time," he said. "Everyone just started running, there was a huge crowd of people."

The 43−year−old said he ran into a nearby Holt Renfrew store with dozens of others and scrambled up to the second floor.

An employee then took him and others to a staff corridor at the back of the store where they squeezed into a tight hallway, Mudavanhu said.

"It was getting stuffy, it was getting hot," he said. "People were panicked, they didn’t get any information."

Store staff eventually opened the door to the hallway and people began leaving, he said, adding that he was still processing what had happened.

"It is a scary feeling, because the thing is we didn’t know where the shots were coming from," he said. "The fear is there, my heart is beating as I repeat the story."

Police asked members of the public to avoid the area and asked witnesses to call them with information. One person was taken from the mall by paramedics but police noted that it was not as a direct result of the shots fired.

The mall issued a statement saying it was closed for the rest of the day while police investigated the incident.

"Yorkdale is secure and we are co−operating with police to safely evacuate the centre," it said. "We expect to open as scheduled tomorrow."

The Toronto Transit Commission said subway trains were not stopping at the mall.

The incident at the mall comes after a string of high−profile shootings in the city, including a rampage that killed two in Toronto’s Greektown this summer and a brazen shooting at a playground that wounded two young girls earlier this year.

Toronto’s mayor said he was relieved no one was injured in the mall shooting.

"Whether it is Yorkdale Mall or anywhere else in Toronto, people should not have to worry about gun violence breaking out," John Tory said in a statement. "There are too many guns available to criminals in the city and I am determined to end that with the help of our police and our government partners."