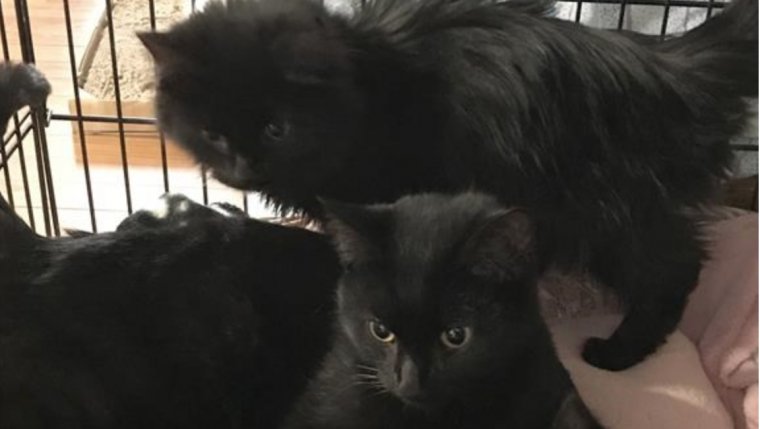 DEER LAKE, N.L. — Three abandoned kittens are recovering after being rescued from a snowbank in western Newfoundland.

Shiver, Stormy and Flurry were found Sunday by an animal−loving truck driver, huddled together for warmth at the side of a road near the farming community of Cormack, N.L.

The driver spotted the moving pile of black fur and retrieved the kittens, warming them with coats while he reached out to a local animal rescue organization.

Tanya Wight of Deer Lake Kitty Rescue said the 12−week−old kittens were lethargic and scared when she brought them home.

"They would just kind of lie there, I think, totally traumatized — their bodies in shock from the experience," Wight said.

By Monday morning, however, the trio were showing signs of improved health, despite some respiratory problems for the smallest, weighing only two pounds.

Wight said she’s received a stream of adoption inquiries since the cats’ story gained public attention, but it will be at least a week before the cats are healthy enough for a new home.

She said the three were found in the snow without any tracks nearby, leading Wight to believe they were thrown from a vehicle on the quiet road, where residences are widely spread out.

Wight said a police report has been filed into the case of what she calls a "blatant act of animal cruelty and abandonment."

Based on their friendly behaviour, she believes the animals were house cats.

Since founding the Deer Lake Kitty Rescue in 2015, Wight said she and her small group of volunteers have rescued more than 250 animals.

"I try not to go to the dark place, where you think people are actually cruel and want to see these animals suffer," she said. "It’s more of an ignorance piece ... as in not knowing that these animals, these kittens, are not going to make it to the farm a kilometre away."

The first three cats will eventually be adopted through the NL West SPCA in Corner Brook.

Wight said if the truck driver hadn’t spotted them, the cats could have been covered in snow by a passing snow plow.

"They would have just been covered and nobody would have known they were there. We often think, how many do we miss?"