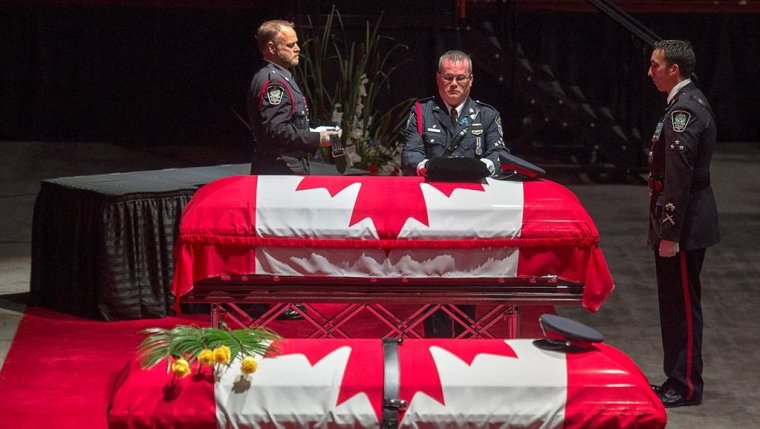 FREDERICTON — A fellow police officer told a packed stadium that the sacrifice made by Constables Robb Costello and Sara Burns of Fredericton will never be forgotten.

Const. Debbie Stafford spoke during a regimental funeral Saturday afternoon to honour the fallen officers, who were killed in the line of duty last week in an attack that also left two civilians dead.

"May today be a celebration of their lives and a way to honour them for making the ultimate sacrifice," Stafford said.

Officers laid the caps and belts of the fallen constables on top of their caskets, covered by Canadian flags, next to roses placed there by family members.

Wreaths were also placed at the front of the Aitken Centre, beside framed photographs of Costello and Burns.

Thousands of police officers and first responders from across North America travelled to Fredericton to attend the funeral, which began with a heart−wrenching bilingual rendition of "O Canada" by award−winning singer Measha Brueggergosman.

Saturday’s events began with a funeral procession, where 1,500 officers and first responders marched through the streets of Fredericton, while hundreds of others lined the routes, somberly watching.

Rain poured from the sky during the procession, mirroring the gloom that has taken over the small city of nearly 60,000 — which was not overlooked by Fredericton Police Force chaplain Reverent Verner Drost.

"The rain in our city today represents the tears of sadness and grief that flow from our hearts brought about by the terrible and senseless loss of these two heroes we dearly love," he said during the funeral.

Forty−eight−year−old Matthew Vincent Raymond has been charged with four counts of first−degree murder in the shooting, and is set to appear in court on Aug. 27.

The lives of the other two victims were also honoured this week by their families and friends.

A public visitation was held Wednesday evening for Wright at a funeral home near Woodstock, N.B., although her obituary said there would be no funeral service by request and her internment would be held at a later date.

Similarly, no funeral was held for Robichaud.

His widow, Melissa Robichaud, told The Canadian Press that he had requested to be cremated and that she planned to scatter his ashes Thursday evening along a strip of road the avid motorcyclist had often biked along.

On Friday a judge lifted a publication ban that had been imposed last Monday on court documents revealing details about how the deadly attack unfolded.

The ban came hours after several media outlets had already reported on what they contained.

The newly released documents say the alleged gunman was wounded as he allegedly engaged another officer from his apartment window.