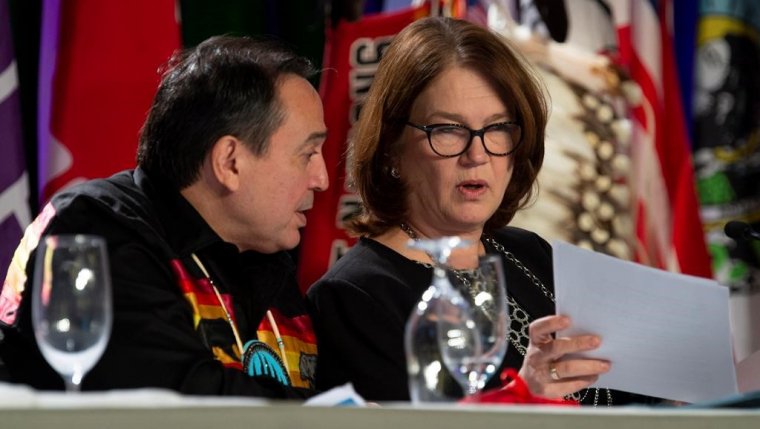 Speaking at a gathering of Assembly of First Nations chiefs at an Ottawa hotel Wednesday, Philpott said families should not be torn apart because they are poor or because parents have health problems.

"No more scooping First Nations children from their families and communities, no more tearing apart your families. No more lost children who don’t know their language, their culture, their heritage," she added.

The federal government announced last week that it plans to introduce legislation on child services co−developed with Indigenous groups in the new year, with Prime Minister Justin Trudeau confirming Tuesday the bill will come in January.

Philpott said that legislation, coupled with the work the government is doing together with Indigenous people, "can draw a line in the sands of time."

The broad strokes of the bill were set over the last year in consultation with Indigenous leaders and families after an outcry from parents and communities that children were not being properly cared for.

"Every single day in this country on our watch, while we all are leaders, we know someone is walking into the home of one of your people, or into a hospital room where a young woman has given birth and are taking that child away," said Philpott.

She said the reason that’s given is "neglect," which places blame on parents and families, when very often the real neglect is society’s fault.

In a question−and−answer session, more than one chief thanked Philpott for the work being done on the child−welfare legislation, with one chief telling Philpott she’s the best minister for Indigenous services they have ever had.

But chiefs also asked for reassurance that funding would continue through Jordan’s Principle, which requires that First Nation children receive equal access to government services regardless whether they live on or off reserves, and Philpott said Trudeau understands that the funding available under Jordan’s Principle has to continue.