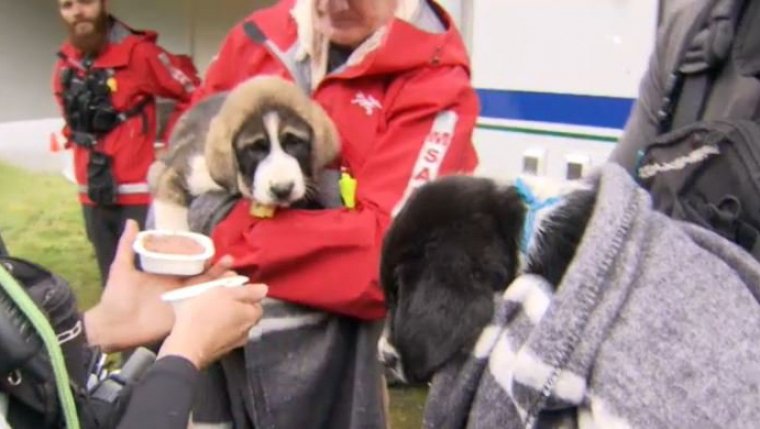 MISSION, B.C. — Two St. Bernard−cross puppies are safe and warm after being rescued from the side of a cliff in a rural area of British Columbia’s Fraser Valley, east of Vancouver.

A search and rescue team plucked the 16−week−old female pups from the cliff on Sunday, four days after a resident said she heard dogs howling from somewhere in the bush near her home.

Mission Search and Rescue search manager Dean Osen says the team usually does not rescue animals but decided to step in after learning a group of concerned citizens planned to try to reach the dogs in the challenging terrain.

Fifteen trained searchers set out Sunday, uncertain of what they would find, but when they reached the top of the cliff the enthusiastic puppies literally rolled into their outstretched jackets and cuddled up while they were carried to safety.

A vet at the staging area examined the hungry pair and declared them in good shape despite their lengthy ordeal, but also noted the dogs’ nails had been trimmed suggesting recent human care.

The woman who sparked the search after hearing the crying pups says efforts will be made to find the owner, but Emma Wilfert says there hasn’t been much luck yet.

"We’ve looked on a lot of the missing pets pages and nobody seems to have reported them," she says.

Wilfert says another neighbour along rural Stave Lake Road reported speaking to a woman who said she had lost two dogs, but she didn’t leave her name or phone number. (CKNW)