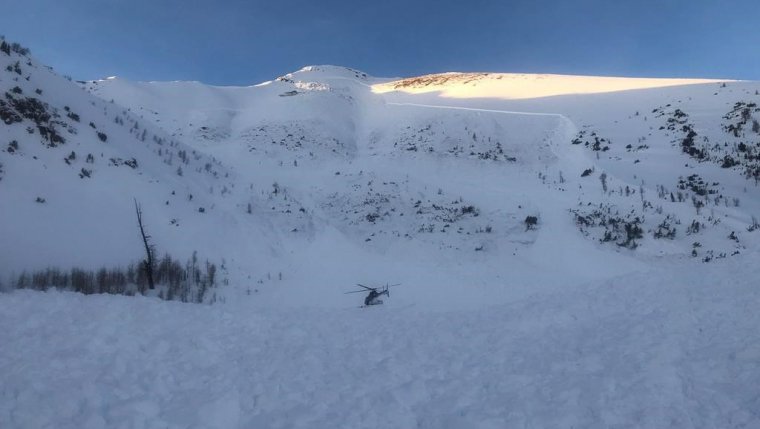 INVERMERE, B.C. — One snowmobiler is dead and another may have been swept into a nearby lake after a group of three sledders triggered an avalanche in southeastern British Columbia.

A release posted by Avalanche Canada says the three were sledding Saturday on Mount Brewer in the Purcell Mountains, just west of Invermere, when two of the riders were swept away by what is described as a very large snow slide.

The release says the 200− to 400−metre wide avalanche tore away the snowpack from the surface to the ground layer and continued for more than a kilometre down the mountainside before running onto a small lake.

Avalanche Canada says at least one of the unnamed victims was wearing an airbag and managed to activate it, but that person was buried under more than two metres of snow and could not be revived.

Recovery efforts for the second person are continuing as rescuers say a transceiver signal has been located on the lake where debris is floating on the water.

A forecast from Avalanche Canada describes the snowpack over much of the Purcell region as weak and touchy due to two grainy layers, one right at the base and the other about 80 to 120 centimetres below the surface.

"Humans have and will continue to be able to trigger these layers in areas where the snowpack is shallow," says the report.

It estimates the likelihood of triggering a slide in the area where the fatal avalanche occurred could increase due to a warming trend expected to last until Tuesday.

"Numerous very large avalanches have been reported daily," the report warns, adding "this is the type of weak snowpack that could stick around for the remainder of the winter season."