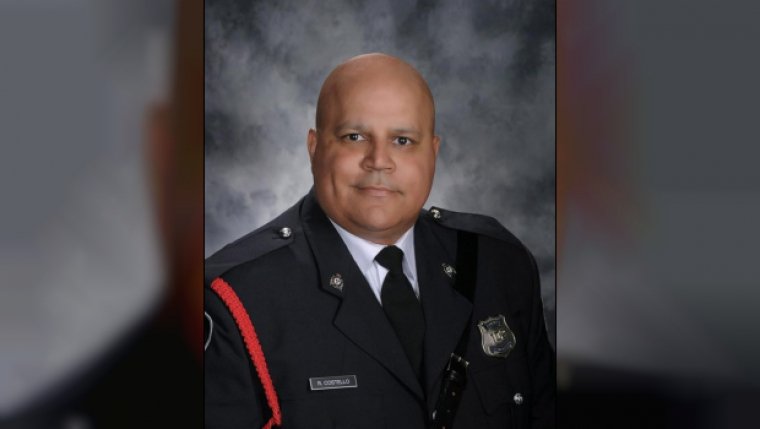 But since Friday afternoon, hours after McLean’s common−law partner Const. Robb Costello died in the line of duty, it has become a heartbreaking real−time peek into the intense pain that comes with losing a spouse so suddenly.

"That first wave hits you and it’s rough but it’s a tsunami, it retreats and seemingly takes everything with it and you’re left with a world you recognize and can navigate but that is completely vacant," she wrote Sunday.

Costello was killed at about 7 a.m. Friday, one of four people gunned down outside an apartment complex on Fredericton’s north side.

A few hours later, McLean tweeted to media that she was "grateful for the outpouring of sympathy," and referred requests for further interviews to the Fredericton Police Force.

Then, a few hours later, she began to describe her grief for her hundreds of followers: "This morning the most amazing man kissed me goodbye as he headed to work. This evening, I lay in our bed knowing that kiss will never happen again."

On Saturday, she tweeted again: "It is very surreal to see your spouse’s face all over TV and news outlets and know that that’s the only way you’ll see him today."

"Librarian friends: is there a guide to being a widow? I’m nervous and unsure I need a guide to follow."

Late Saturday, Fredericton police were called to another dramatic incident. Heavily armed officers and about a dozen police vehicles encircled part of a neighbourhood not far from the shooting that killed Costello.

McLean retweeted a police tweet about the then−ongoing second incident and added: "What a thing to read while you work on writing your spouse’s obituary." The second incident ended peacefully.

Also Saturday, police issued a statement on behalf of both officers’ families. In the statement from Costello’s family — in which she was referred to as Jackie Steeves, a name she also goes by — talked at length about her partner and asked for privacy.

"While I met Robb relatively late in my life, he was my soulmate, my best friend and the light of my life. We shared a love of one another that I only believed existed in the movies, except this was real life and it really happened. I cannot even begin to imagine my life without him," she said.

"Robb was a dedicated family man. My children were so fond of Robb that they that they affectionately referred to him as their ’Faux−Pa.’ Robb’s mom was the most important woman in his life and Robb was extraordinarily proud of his daughters."

"Robb told me every single day that I was awesome, beautiful and he loved me. Sometimes he was not as prompt as others so he’d say ’did I tell you yet today how awesome you are?’"

A few minutes later, she added: "My daughter said to me last night ’without Faux−pa, who is going to tell me I am beautiful everyday?’"