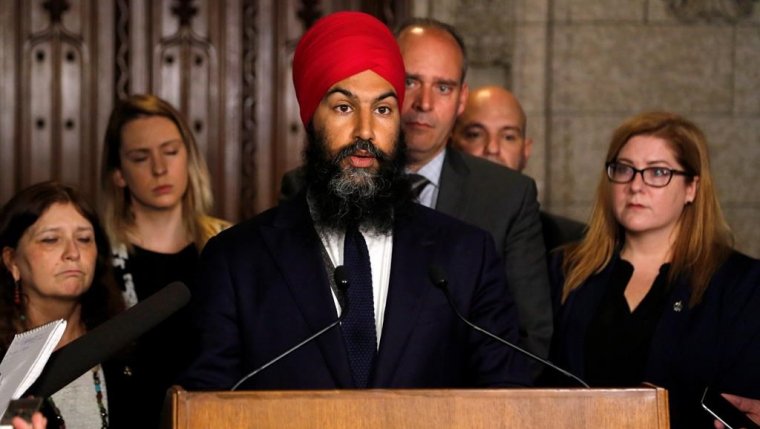 OTTAWA — NDP Leader Jagmeet Singh kicked Saskatchewan MP Erin Weir out of his party’s caucus Thursday as he tried to close the book on what has become a messy and increasingly combative controversy for the third−place New Democrats.

Indeed, it wasn’t immediately clear if Weir planned to quietly accept his fate, or whether he planned to continue to push back against what he has characterized as a politically motivated and unjustified smear campaign from within his own party.

While Moore said she had not personally experienced anything untoward, Singh deemed the allegation serious enough to suspend Weir from his caucus duties and ask University of Ottawa law professor Michelle Flaherty to investigate.

Flaherty found credible evidence to support one allegation of harassment and three allegations of sexual harassment against Weir, Singh told a news conference outside the House of Commons.

He did not reveal specific details about the allegations, other than to say Weir "failed to read non−verbal cues in social situations and that his behaviour resulted in significant negative impacts on the complainants."

However, he added, "when Mr. Weir was told his advances were unwanted, he stopped." Based on those findings alone, Singh said, it appeared rehabilitation would be adequate to address the problem and ensure it did not happen again.

But that was before Weir alleged in a statement and in media interviews Tuesday that the complaint came from a member of former leader Tom Mulcair’s staff in retaliation for Weir’s desire to question the Trudeau government’s national carbon−tax plan.

"Last night, I informed Mr. Weir of my decision to remove him from caucus, effective immediately."

Even before Singh broke the news, Weir’s office sent out a separate statement that didn’t mince words, blasting the harassment investigation’s "flawed process, its exaggerated findings and Singh’s reaction to them."

It wasn’t until a CBC report that said an unidentified complainant had accused Weir of speaking to her in an angry and belligerent way did he come to the conclusion that a member of Mulcair’s staff was behind the complaint, it continued.

The statement also accused the party of "soliciting complaints" that led people to "retrospectively reinterpret past interactions with Weir," and that the findings of sexual harassment "fall on the less serious end of the spectrum."

"The investigator made a general finding of ’sexual harassment’ that Weir had probably sat or stood too close to people at social events and engaged them in conversation more than they wished to speak with him," it said.

Weir said he has apologized for making anyone uncomfortable, and was willing to participate in some form of rehabilitation, but felt compelled to speak up after the CBC story.

"Given the nature of the report’s findings," the statement concluded, "Singh’s initial decision to reinstate Weir was correct and constitutes the only just outcome."