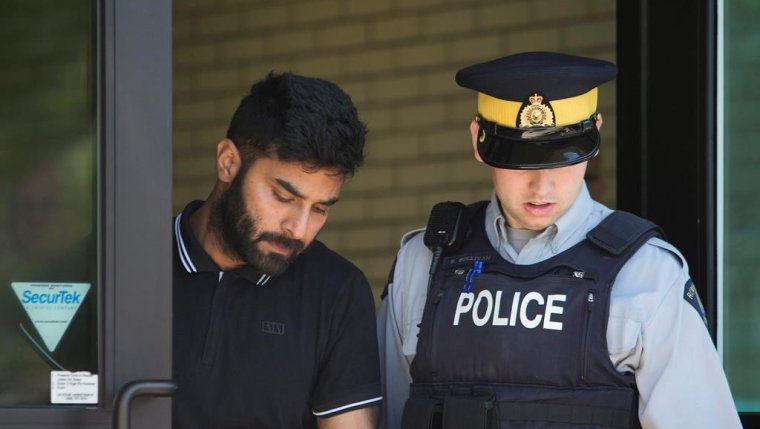 MELFORT, Sask. — The father of one of the hockey players killed in the Humboldt Broncos bus crash says he felt empty as he caught the eye of an accused truck driver who was released on $1,000 bail in court Tuesday.

Jaskirat Singh Sidhu, who is 29 and from Calgary, faces several conditions, including that he not drive and that he surrender his passport.

Two parents, Scott Thomas and Myles Shumlanski, were in provincial court in Melfort, Sask., for Sidhu’s appearance. The case was put over to Aug. 21.

Thomas, whose son Evan died in the crash, said he felt compelled to go.

"It was what we expected. We kind of expected that he would get bail," said Thomas. "I just wanted to come today and represent the families who maybe wanted to be here that couldn’t be here, and at least have a presence in the building. Maybe he would feel a bit responsible for taking our sons’ lives."

"In case this goes to a plea bargain, at least he can put my face to it," he said. "That’s all I wanted to accomplish today ... to hopefully see him face to face and, in case this never goes to trial, he’s seen my face."

Shumlanski, whose son Nicolas was injured, didn’t speak to the media. Neither Sidhu nor his defence lawyer spoke outside court.

Russell Herold, whose son Adam died in the crash, didn’t go to court but said he was glad Sidhu had to surrender his passport.

"At least they put some conditions on it," he said. "The bail seems low, but I guess if you go by the law — he doesn’t have a prior record and hasn’t tried to flee so I guess this is common.

"I’d prefer he be kept in jail, but we don’t have a choice in that."

Sixteen people, including 10 players, were killed and 13 players were injured when the junior hockey team’s bus and a transport truck driven by Sidhu crashed at a rural Saskatchewan intersection on April 6. The team was on its way to a playoff game.

Sidhu was not hurt in the crash. He was taken into custody, but was released the same night.

RCMP have said they will not release any details of the investigation or what they believe happened. The only thing the Mounties have said to this point is that the truck was in the intersection when the collision occurred.

— With files from Colette Derworiz in Edmonton