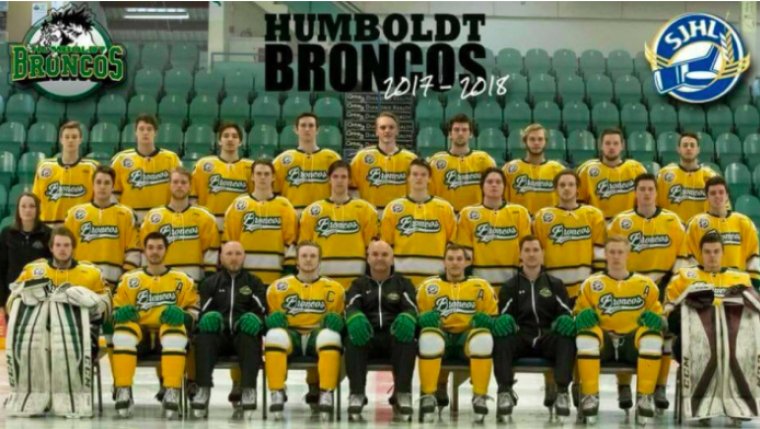 SASKATCHEWAN - The driver of a transport truck faces 29 criminal charges in a fatal collision that killed 16 people, including 10 players, with the Humboldt Broncos junior hockey team.

Thirteen other players were injured.

He was arrested Friday morning and was being held in custody pending a court appearance in Saskatchewan next week.

Sidhu was charged exactly three months after the crash at a rural Saskatchewan intersection in the late afternoon of April 6.

The Broncos were on their way to a playoff game in Nipawin, Sask., when their bus and a semi−trailer carrying peat moss collided.

The truck driver was not hurt. He was taken into custody after the crash, but was released the same night.

RCMP said they will not release any details of the investigation or what they believe happened. The only thing the Mounties have said to this point is that the truck was in the intersection when the collision occurred.

In April, police said they had recovered driver log books along with engine control modules that had been sent to California for further analysis.

"In order to lay these charges, we require evidence the motor vehicle was being operated in a manner that is dangerous to the public," said Williams.

"Every piece of information was carefully examined."

Tom Straschnitzki, whose son Ryan was paralyzed from the chest down, said he was relieved charges were laid.

"It’s finally come to charges being laid, so we are very happy about that because we don’t want that to be ignored at all," Straschnitzki told The Canadian Press.

"It should put a little closure to the first step and the second step is ... let’s see what the courts do and find out what exactly happened.

"I think that’s what people want to know. What exactly happened? How it did happen and why it happened."

Straschnitzki said he and his wife, Michelle, hadn’t thought much about charges in the three months since the crash.

"We were just too focused on Ryan and just had the faith in the RCMP that they did a lot of hard work to get it done. I guess we’ll just wait and see in the courts."

Sukhmander Singh, owner of the Calgary−based trucking company that employed Sidhu, said in April that the driver was going to the doctor and receiving counselling.

Singh said he basically went out of business after the crash because Alberta Transportation ordered his company, Adesh Deol Trucking Ltd., to keep its only other truck off the road.

On Friday, Transportation Minister Brian Mason said ways to improve trucking safety could be announced within two weeks and will include qualification and training of drivers of large vehicles, how to test drivers in all licence categories and how better to regulate the trucking industry.

He also said results of a review of intersection safety on Alberta’s highways should be available by the end of the summer.

Saskatchewan’s Crown insurance company said in an internal memo sent to driving instructors after the crash in April that a mandatory training plan should be in place by next year.

The memo from Saskatchewan Government Insurance said details were still being worked out, but the curriculum was to include at least 70 hours of training in the classroom, yard and behind the wheel.

The tragedy sparked an outpouring of emotion across Canada with offers of money and other support for the victims and families involved. A GoFundMe campaign raised just over $15 million for the survivors and the families of those who died.

The Humboldt Broncos released a statement Friday saying the organization has faith in the justice system and will be watching as the court process unfolds.

"Our primary focus continues to be supporting the survivors, families and others that were directly impacted by the tragedy on April 6th," the team said. "We will have no further comment on the investigation or the resulting charges until the process has concluded."