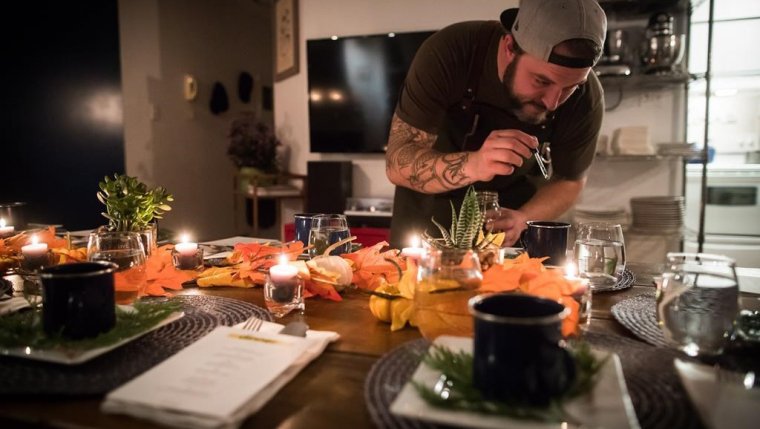 VANCOUVER — One of the first questions chef Travis Petersen asks guests as they arrive to his supper club at a semi−secret Vancouver location is how they would gauge their cannabis tolerance. The 34−year−old former "MasterChef Canada" contestant will then dose the forthcoming multi−course dinner with the appropriate amount of cannabis−infused oil.

Eight diners sat around a large wooden table adorned with fall−themed centrepieces and joked about whether they’re a one or 17 on a scale of 10 before falling silent as artfully plated dishes of geoduck, octopus and chorizo tacos, and butternut squash tortellini appeared before them — which Petersen had topped off with an eye dropper of cannabis oil.

Petersen is one of several chefs and companies serving cannabis−infused meals at intimate gatherings in secret locations to test the appetite for fine, high dining. The cooks behind these illicit events are gearing up to expand their operations with catering services, permanent restaurant menu items and more once the Canadian government legalizes the sale of recreational edibles sometime in the next 12 months.

"I’m looking forward to seeing what is going to be allowed and where the sort of culinary industry takes us," said Petersen, owner and head chef at Nomad Cook, who has run similar events in other Canadian cities.

He ran his first such dinner party on April 20 this year, an iconic date in cannabis culture. The four days of brunch and dinner events in Vancouver this month marks his 10th cannabis−infused dining series during which he’ll serve his one−thousandth customer on Saturday.

The small−scale meal series attracts a wide demographic, he said. Petersen first expected to see mostly stereotypical cannabis users, but said the majority have never tasted edibles or are infrequent cannabis consumers, and patrons range from 19 to 70 years old.

However, events such as Petersen’s run contrary to current legislation.

Fresh or dried bud, oil, plants and seeds will be legal in Canada on Oct. 17, but edible legalization will take longer. The federal government has said it intends to legalize edibles within a year of that time, but details have been sparse.

Health Canada says that while the Cannabis Act will govern all edible products made from cannabis mixed with food ingredients, it won’t apply for use in restaurant meals.

"While edible cannabis products will be permitted for legal sale within one year following the coming into force of the Cannabis Act (i.e. by October 17, 2019), the framework would not permit restaurants to prepare and serve meals containing cannabis to the public," spokeswoman Tammy Jarbeau wrote in an email.

Although a restaurant or commercial kitchen could seek a federal licence to produce edible cannabis products, all such products sold to customers must be packaged and labelled, in child−resistant containers with labels that display a health warning.

"As a result, these requirements preclude the sale of prepared meals."

Petersen only encountered trouble once while running a series in Victoria after authorities learned about the dinners.

He, and many others who provide such experiences, don’t seem concerned about running afoul of the current laws. Most say they take safety precautions, like infusing the food with small, individualized doses, not serving alcohol, and ensuring guests have a safe way to get home.

Sarah Best founded Dirt earlier this year. The Toronto−based company already has run five cannabis−infused dinners and several other edible events with local businesses, like coffee shops, with more planned for the future.

"I am perfectly comfortable with the way that our business operates," she said, explaining the events are private and dosing is done in a responsible, safe manner.

"It would be naive for me to say that we’re not all a little bit pushing the boundaries, I guess, at this like current moment," said Best.

Once legalization and clarity is achieved, chefs and business owners like Petersen and Best, look forward to growing this burgeoning business.

Petersen hopes he’ll be able to move beyond microdosing each guest’s dish individually with cannabis oil after the food is plated.

"It’s not the traditional fun way of cooking with cannabis where we’re infusing it into sauces and into the actual proteins ... ahead of time," he said, adding that’s a less accurate dosing method.

Best anticipates targeting international and domestic tourists with a space that provides both education and food. She wants to offer infused dining, as well as cannabis−free food with suggested cannabis pairings — more like a wine tasting.

Polina Privis and Tanya Dercach, a married couple who co−own The Kingston Social House, a Toronto bar, and Social Sessions, a company that hosts cannabis−infused dinners, want to add some cannabis−infused items to their pub menu.

"At some point, we can be a cannabis−friendly restaurant," said Dercach.

Perhaps, one day, they’ll list a Caesar salad on their menu, with the option of adding a dressing containing a five milligram dose that patrons can pour over the salad themselves, said Privis.

At the bare minimum, the duo hope to announce the pub as a cannabis safe space as of Oct. 17 — one where patrons can enjoy a toke during a private event.

But for now, it’s hard to know which of these future plans will be possible as the details around upcoming edibles legislation remains a question mark.

"This is all up in the air," said Privis. "And who knows what the legalities will be."