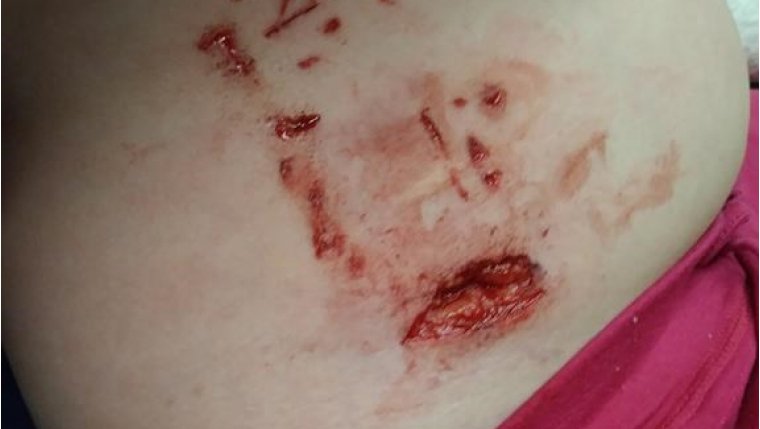 SASKATOON — A witness to an incident where police say one of their dogs accidentally bit a young girl says the animal shook the child like Cujo, and officers had a difficult time getting it to release her.

Police said in a news release that the dog, which was in a harness on a leash, rounded a corner of a building while officers were tracking suspects in a home invasion on Saturday afternoon and latched onto the girl.

They said young girl was not connected to the investigation, and that the dog "instantly" released her when commanded by the handler.

But Amanda Pritchard, who saw the incident on her front steps, said the handler shouted repeatedly to let go, but the dog still held the girl tight in its jaws.

She compared it to the 1980s horror movie "Cujo," which was based on a Stephen King novel about a rabid St. Bernard.

Pritchard said she was just inside her doorway when she heard a growl and looked back to see the six−year−old, who was with other children including her own daughter. The dog grabbed the girl and pulled her from the step.

"Out of nowhere there was two officers that I saw. One was on top of the dog. Three times he had told the dog to let go. ’Let go! Let go!,’ he was saying to the dog. The dog did not let go. The dog, in fact, growled at the cop and shook his head like he was going to tear her," Pritchard said, noting the girl is six, not eight as police earlier stated.

Police said in their news release that the girl was taken by ambulance to hospital with her mother, and her injuries aren’t life−threatening.

Leslie Welder said her daughter, Autumn Clifford, required many stitches to her abdomen to close wounds from deep bites.

Tissue was sticking out of some of them, she said.

"Right away I saw the blood on the side of her shirt," Welder recounted about when she saw her daughter after the attack.

"I lifted her shirt and it was way worse than just one bite."

The attack happened shortly after Pritchard, Welder and their children returned from spending the hot afternoon at a nearby spray park.

"My other daughter — she’s seven — stated that all Autumn did was look over and say, ’Oh, look! Puppy!’ And next thing you know he was on her, pulling her down to the ground and attacking her," Welder said.

The chase for the home invasion suspects was called off, and police said the injuries arising from the incident with the dog will be investigated.

Welder said her daughter is recuperating now at home.

Note to readers: This is a corrected story. An earlier version that was based on police information stated the girl was eight. The child’s mother says the girl is six.