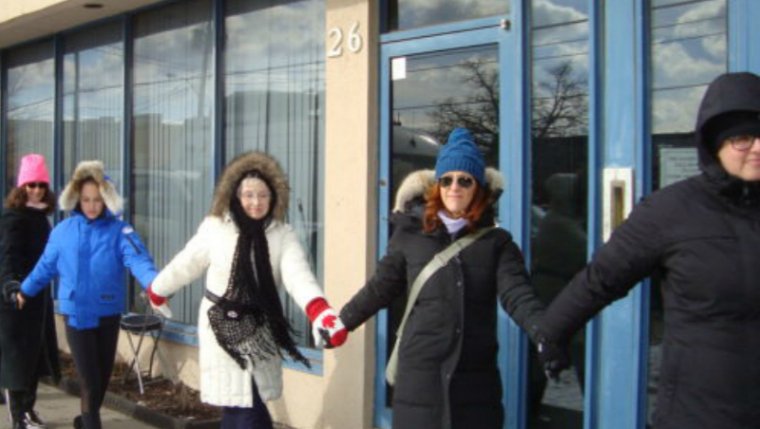 TORONTO — One week after a mass shooting at a Pittsburgh synagogue, people of various faiths joined hands to form a circle around a Toronto temple in what they called a symbolic gesture of protection and support for the Jewish community.

"This was a moving act of human kindness from members of the Toronto community," Levy said.

More than 200 Muslims and Christians took buses to the Holy Blossom Temple in north Toronto to participate, said Haroon Sheriff, president of the Imdadul Islamic Centre.

"We held hands together and stood shoulder−to−shoulder," said Sheriff. "The community came together to give their support and sympathy."

He said the gesture was meant to show support and solidarity after 11 people were killed in a shooting during worship services at the Tree of Life Synagogue in Pittsburgh on Oct. 27.

The victims’ ages range from 54 to 97, and they included a pair of brothers and a husband and wife. Six people were also injured in the attack, including four police officers.

Also on Saturday morning, about 100 people gathered for what was called a "healing service’’ outside the Pittsburgh synagogue. Former Tree of Life rabbi Chuck Diamond led a 45−minute service, which featured prayers, songs and poetry.

Fienberg spent most of her career as a researcher at the University of Pittsburgh, retiring in 2008 from her job studying learning in the classroom and in museums. Before that she was a member of the Holy Blossom Temple community, which is one of Toronto’s oldest Jewish congregations.

Splansky said Fienberg was a "very special person" who was married at the temple and whose confirmation photo is on its wall of honour.

"I know there’s a whole generation of Holy Blossom members who grew up here with her, who went to school with her and celebrated her wedding day here at Holy Blossom," said Splansky, who said she didn’t know Fienberg personally.

Sheriff said he felt it was important for the community, especially people from different faiths, to come together to stand up against hate.

− With files from the Associated Press