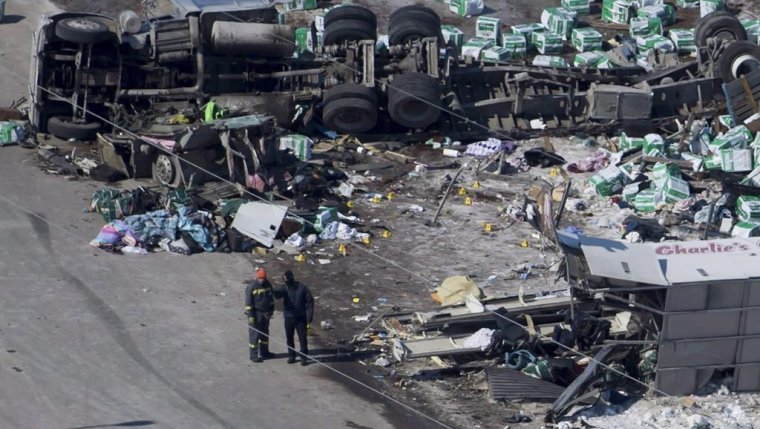 REGINA, SK — Police say it’s too early to say what happened in a fatal bus crash involving the Humboldt Broncos junior hockey team and whether charges will be laid.

RCMP Assistant Commissioner Curtis Zablocki says what is certain is that a tractor−trailer was in the intersection when the truck and the team bus collided on April 6.

"All of our efforts are dedicated to determining why the tractor−trailer unit was in the intersection," Zablocki said Thursday.

"We know the road conditions were clear and the sun was shining at the time of the collision."

Sixteen people — including 10 players — were killed and another 13 people were injured. The driver of the semi−trailer was not hurt. He was taken into custody immediately after the collision and released later that evening.

"The tractor−trailer unit driver remains in regular contact with our officers," said Zablocki. He said the driver’s level of experience, the size of his load and where he was headed will be part of the investigation.

Sukhmander Singh, the owner of the Calgary−based trucking company, said the truck driver is doing better.

"He’s feeling good now and going to the doctor," said Singh, who added the driver is still in counselling.

Singh said he’s basically out of business after Alberta Transportation ordered Adesh Deol Trucking Ltd. to keep its only other truck off the road. The move is standard when a company has been involved in a serious accident, the province has said.

Zablocki said there are still many unanswered questions and an investigation of such magnitude is measured in weeks or months, not days.

He said experts are looking into three areas: environmental factors such as road conditions and visibility, the mechanics of both vehicles and the role of the drivers.

The intersection north of Saskatoon was closed Thursday because a forensic collision reconstruction team was doing more tests and analysis.

Zablocki said it’s not unusual to revisit a collision scene.

"Our folks have gone back ... to reposition similar or like vehicles in the area, in the intersection, and further examine potential site lines and other analytical aspects."

— With files from Bill Graveland in Calgary